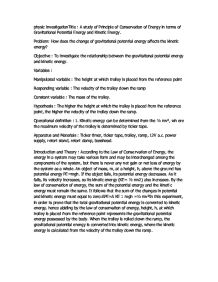 invetigation:Principle of conservation of energy in terms pe and ke

physic investigationTitle : A study of Principle of Conservation of Energy in terms of Gravitational Potential Energy and Kinetic Energy.

Problem: How does the change of gravitational potential energy affects the kinetic energy?

Objective : To investigate the relationship between the gravitational potential energy and kinetic energy.

Manipulated variable : The height at which trolley is placed from the reference point

Responding variable : The velocity of the trolley down the ramp

Constant variable : The mass of the trolley.

Operational definition : 1. Kinetic energy can be determined from the ½ mv², where the maximum velocity of the trolley is determined by ticker tape.

Introduction and Theory : According to the Law of Conservation of Energy, the energy in a system may take various form and may be interchanged among the components of the system, but there is never any net gain or net loss of energy by the system as a whole. An object of mass, m, at a height, h, above the ground has potential energy PE=mgh. If the object falls, its potential energy decreases.

Conclusion:In conclusion, the kinetic energy is increasing linearly to the gravitational potential energy. Hence, according to the Principle of Conservation of Energy, the sum of kinetic and potential energy at any point is conserved, provided there is no work done by other external forces acting on it.