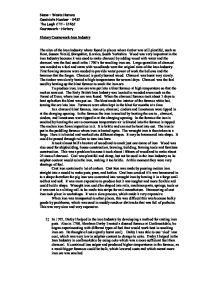 History Coursework-Iron Industry The sites of the Iron Industry where found in places where timber was still plentiful, such as Kent, Sussex Weald, Shropshire, S.wales, South Yorkshire. Wood was very important in the iron Industry because it was used to make charcoal by adding wood with water and the charcoal was the fuel used in the 1700's for smelting iron ore. Large quantities of charcoal was needed as a fuel and areas with woodlands were the original sites of the Iron Industry. First flowing streams were needed to provide water power of work the bellows and the hammer that the forges. Charcoal is partly burned wood. Charcoal was burnt very slowly. The timber was slowly heated at high temperatures for several days. Charcoal was the fuel used by heating up the blast furnace to smelt the iron ore. To produce iron, iron ore was put into a blast furnace at high temperature so that the molten runs out. The Early British Iron Industy was located in wooded areas such as the Forest of Dean, where iron ore was found. ...read more.

It was more expensive to produce but it was tougher and more flexible and could hold a shape. Wrought iron could be shaped into rails, machines parts, springs, tools or it was sent to a slitting mill to be made into strips for nail manufacture. Hammering of cast iron took place in workshops. It was a slow process, which made it very expensive. When iron was transported to other places, this was difficult this was because bulky goods by packhorse, which was used in muddy roads or dirt tracks that was full of potholes. This was very slow and very expensive. 2) In 1707, Darby I helped in the iron Industry by developing a method for casting iron pots. Also in 1708, Abraham Darby I rented a disused furnace at Coalbrookdale, he began experimenting with different types of fuel that would work best in smelting iron ore. He thought of coke (partly burnt coal). Darby I was able to use 'clod' iron coal, which was very low in sulphur content to change to coke. Darby I helped in the Iron Industry in coalbrookdale by using coke which was a more sufficient fuel then charcoal. ...read more.

Darby III continued to improve the businesses. He tried to attract new workers by buying local farms to supply them with food. His greatest work was to promote Coalbrookdale iron. He managed to show the world that the iron produced in Coalbrookdale was strong and a versatile material as well as having many different uses. Darby III was able to build an iron bridge. He built the iron bridge in 1779 and this was the first iron bridge. The iron bridge was opened in 1781. Before this year all the bridges were made of stone, brick or timber. Before, coke iron was too weak and charcoal iron was too expensive, but after 50 years iron making has improved a lot and the iron that was produced with Darby III leadership could not only be used to make iron bridge but also to make boats, steam engines and wheels. The iron bridge was the symbol of Darby III success and a symbol of the new age in iron and this made Coalbrookdale Company internationally famous. Darby's business went from strength to strength and soon many people were dependant on the Coalbrookdale for goods that was made in the company. Name - Wasim Haroon Candidate Number - 0432 The Leigh CTC - 12462 Coursework - History ...read more.