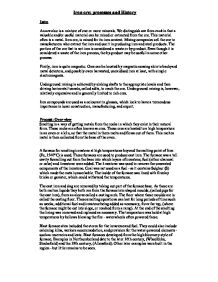 Iron ore: processes and History Intro An ore also is a mixture of one or more minerals. We distinguish ore from rock in that a valuable and/or useful material can be mined or extracted from the ore. This material often is a metal. Iron ore, is mined for its iron content. Mining companies sell the ore to manufacturers who extract the iron and use it in producing iron and steel products. The portion of the ore that is not iron is considered a waste or by-product. Even though it is considered a waste of the iron process, the by-product may be useful in some other process. Firstly, iron is quite magnetic. Ores can be located by magnetic sensing akin to backyard metal detectors, and possibly even harvested, unoxidised iron at least, with simple electromagnets. Underground mining is achieved by sinking shafts to the appropriate levels and then driving horizontal tunnels, called adits, to reach the ore. Underground mining is, however, relatively expensive and is generally limited to rich ores. Iron compounds are used as a colourant in glasses, which look to have a tremendous importance in lunar construction, manufacturing, and export. Process: Over-view Smelting is a way of getting metals from the rocks in which they exist in their natural form. These rocks are often known as ores. These ores are heated to a high temperature in an oven or a kiln, so that the metal in them melts and flows out of them. ...read more.

The specific nature of the activity carried out can be based on the shape of, quantity of, chemical analysis of and distribution of the slag. Sometimes slag will be the most visible sign of that process on the surface - large slag heaps sometimes have a different vegetation cover to that of the surrounding area, but the amount present can vary widely. Sometimes Medieval slag was robbed to be smelted down by improved Post-Medieval technologies, such as blast furnaces, or for road-metalling and as an addition to fields. Coal contains large amounts of Sulphur (S). This cannot be used to create cast iron as it will cause the metal to become impossible to work. Coke is coal that has been partially heated to drive off the Sulphur. This happened in coke ovens or just in the open, where the burning process could be specifically controlled by covers (sometimes completely) and wetting. Coke ovens were introduced in 1763AD. These ovens had a chamber filled with coal dust, a chimney and a door that sealed the chamber after staring the burning. The coke was formed by slow, but complete combustion. Removal of the coke was achieved by breaking the seal and using a small crane and scooped shovel. Coke ovens were built in rows, which could be served by waggonways. The gases produced could be used elsewhere, such as heating boilers for making steam. ...read more.

His son, Abraham Darby II, and his grandson, Abraham Darby III, eventually perfected his method. Because they kept the secret, the idea of smelting iron using coke did not become widespread until the second half of the 18th century. The Darby's method of producing iron could only be used for cast iron. The search was still on for a better and cheaper method of producing both wrought iron and steel. Until that time, steel had been very expensive to produce and its uses were limited. Charles Bage Charles Bage designed the Ditherington Flax Mill, in Shropshire. Ditherington was built in 1796, part of the empire being created by Leeds - based industrialist John Marshall and designed by his business partner Charles Bage. It took over a year to build and was a first in structural engineering; it was the first iron-framed building in the world. It's the mill's design that makes it such a groundbreaking building, because it was the first building in the world to be constructed around an iron frame. Charles Bage developed a perfectly valid method of designing cast iron beams on the basis of tests and Galileo's bending theory. (bd2) x (a constant depending on the material) Where b and d are breadth and depth of section This system was later taken up and employed to construct tall buildings all over the world. Essentially this structure represents the birth of the skyscraper, most notably adopted during the reconstruction of Chicago almost a century later. ...read more.

This is a factual account of the history of iron production. It is not written very clearly, with the author often writing incomplete sentences. It uses simple, easy to understand language and contains some equations.