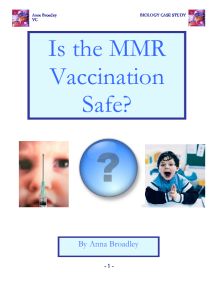 Is the MMR vaccination safe?

Contents 2 Introduction 3 How does MMR give immunity? 4 How was MMR tested for safety? 5 What about the side effects? 6 Is there a link to autism and bowel disease? 7 Are separate vaccinations a better alternative? 10 What about mercury in vaccinations? 12 Are homeopathic substitutes an alternative? 11 Conclusion 12 Bibliography and References 13 Introduction MMR is a combined, live, attenuated vaccination which is given to children firstly at 13 months and then again as a booster at 3 years 4 months. It provides immunity against three diseases caused by viruses: measles, mumps and rubella. The diseases are all extremely unpleasant and can lead to serious complications (26). * Measles is an extremely infectious virus that usually causes high-fever, a rash and generally feeling unwell and will usually last for around five days in children, however sometimes longer in adults. One in every fifteen children will have serious complications, such as chest infections, fits and encephalitis (the swelling of the brain which can lead to brain damage). In extreme cases it can even be fatal. In 1987, the year before the MMR vaccination was brought into the UK 86,000 children caught measles and 16 died (1). * Mumps is another virus which also causes a fever, but also headaches, swollen glands in the face, neck and jaw and it can even result in permanent deafness and encephalitis. It usually last between seven and ten days (1). Mumps is also the biggest cause of viral meningitis in children (7). * Rubella has mild symptoms such as short-lived rash, swollen glands and sore throat. However, it is extremely serious for unborn babies leading to damage in their sight, heart, brain and hearing and even miscarriage or stillbirths due to a condition called Congenital Rubella Syndrome. It is therefore extremely important that there are as few cases of rubella in society as possible to protect pregnant women and their unborn children and particularly that there is immunity in young children who often have contact with pregnant women (1). ...read more.

Professor of Chemistry of the body, from Columbia University, Dr Michael Gershon said it is "implausible". He told London's Science Museum in their Antenna Science News Section: "For Wakefield's theory to work a set of miracles would have to happen. The liver would have to forget to function as a filter. It normally removes foreign molecules from the blood. Autistic patients, however, are not jaundiced so there's no reason to suspect liver failure. The blood-brain barrier, which is impermeable to large molecules, would have to part, like the Red Sea did for Moses and the Israelites, to let toxins from the bowel into the brain." (16) Since Wakefield's first proposal was published and subjected to peer review many other studies were done to test to see if he was right. Not one found the same theory. But many did studies which found that there is absolutely no link between the MMR vaccination and autism: * Dr Petola, a leading professor in children's infectious diseases at the University of Helsinki, conducted a study in Finland, published in The Lancet in 1988, which followed up any children who developed bowel symptoms 24 hours after the MMR jab. Out of the only 31 children who did and which they followed, none developed autism in the 9 years after MMR (11). * Dr Kaye, of Boston University, did another epidemiological study for the British Medical Journal, which is the most respected medical journal in the UK. They examined 305 British children diagnosed with autism between 1988 (when MMR vaccination was introduced) and 1999. It showed that the numbers of children vaccinated with the MMR vaccine was constant (at 95% of the population being vaccinated) but that the numbers of children under 12 years old diagnosed with autism rose 7 percent during this period. If the vaccination caused autism, the increase in autism should have flattened off within a few years of the vaccine being introduced. ...read more.

Therefore, if there is one study that finds a link to autism, or there are any chances of side effects from the vaccination then it should not be administered as an absolute precaution. They feel that until the vaccination is guaranteed to be 100% risk free it should not be used. They follow the precautionary principle that if there is any risk associated, no chance should be taken. Yet, on balance it is clear that the risks associated with MMR are as low as reasonably achievable and in conclusion I think that: * After looking at how carefully the vaccination was tested in many countries on thousands of children before it was licensed in the UK, the vaccination has been checked for safety thoroughly enough. * If you balance the risk of side effects from the vaccination against the risk of complications from the diseases it is far safer for the child to have the vaccination than the disease. * When you compare the limited Wakefield study against the many other more reliable studies that find there is no link to autism, it is safe to say there is not sufficient enough evidence that MMR does cause autism through bowel disease. * Studies show that the combined MMR does not overload a child's immune system, which can cope with many pathogens. * Separate vaccinations are actually less safe than the combined MMR as they lengthen the time the child is at risk by not having immunity. They are also less practical because it adds extra discomfort and the course is more difficult to complete which would reduce the vaccination rate. * MMR does not have thiomersal in it so there is no need to worry about the possible link of the harm of mercury. * Homeopathic alternatives have had no scientific testing to show they work and even homeopathic societies recommend the vaccination. Therefore, I think that after weighing up the risks against the far greater benefits, overall the MMR vaccination is safe and should be continued to be administered throughout the UK. ...read more.

This case study which examines the risk to children of the MMR vaccine is an outstanding piece of work, well-researched, well-written and presented in such a way that the reader, no matter what their scientific background, can understand the writer's arguments with ease.

Whilst it is extremely difficult to remain completely neutral on this subject, particularly with the current measles outbreak in Swansea (April 2013), nonetheless, the writer manages to present both sides of the argument in a dispassionate way, focusing on the scientific evidence rather than emotive newspaper headlines (and there are plenty of those at present!)

I have no hesitation in giving this essay 5 stars and congratulate the writer on a very accomplished piece of scientific writing.