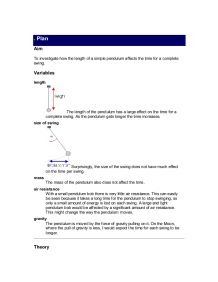 length of a simple pendulum affects the time

To investigate how the length of a simple pendulum affects the time for a complete swing.

Surprisingly, the size of the swing does not have much effect on the time per swing.

The mass of the pendulum also does not affect the time.

The pendulum is moved by the force of gravity pulling on it. On the Moon, where the pull of gravity is less, I would expect the time for each swing to be longer.

When the pendulum is at the top of its swing it is momentarily stationary. It has zero kinetic energy and maximum gravitational potential energy.

The mass was changed by a factor of five and this had little effect on the time.

The size of the swing was changed by a factor of three and this had little effect on the time.

From the trial data it is easily seen

No significant problems or difficulties were encountered when carrying out this investigation. The accuracy and reliability of the results and conclusions are very good. Within the accuracy of the method used, and for the range of values investigated, it is clear that the time for a complete swing of the pendulum is proportional to the square root of the length.

The procedure used was simple and straightforward and no difficulties were encountered.

The thread used was quite stretchy. If the investigation was repeated I would replace it with something more rigid, such as extra strong button thread.

More repeats could be taken but I don't think this would add much to the accuracy of the conclusions.

The student answers the question well, he at first explains the theory then makes predictions based on theory. I would recommend this as you get your marks for explaining why something will happen, not just stating it will. This student ...

The student answers the question well, he at first explains the theory then makes predictions based on theory. I would recommend this as you get your marks for explaining why something will happen, not just stating it will. This student explains why using theory very well. He makes a table which shows that as length increases so does the time period, and a graph. He also goes further and plots a graph of the time period against the square root of length, to prove that the theory is correct and that T is proportional to the square root of length.

The student shows his method well and tries to reduce errors by thinking of how to do his experiment while reducing errors. Which I would recommend always doing as it is best to know what you are doing before you do it, you don't want to be confused as to what to do when you get to the experiment. He takes an appropriate number of repeats making his experiment more reliable. He makes sure to control all variables other than his dependent and independent variables as meant. You must be careful to do this as if you don't you could get incorrect results.

His table is clear and plotting his average results on a graph, his results are clearly shown. He plots his independent variable on the y axis and depenent on the x axis as you are meant to. There are very few spelling or grammatical errors.