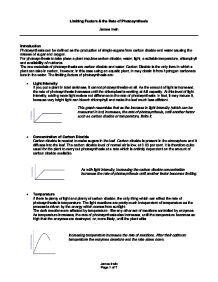 This is because in a variegated leaf the cells either contain chlorophyll or they don't. Carbon dioxide concentration will directly affect the rate of photosynthesis as it is used in the photosynthesis reaction. It is also easy to change the amount of carbon dioxide that the plant receives. Light is also directly used in the photosynthesis reaction and is easy to change in normal lab conditions. Carbon Dioxide and Light are the factors that I will change in the experiment as they are easy to change and measure. Photosynthesis and the Environment Limiting factors are of great importance to plants in their natural surroundings. The concentration of carbon dioxide in the atmosphere does not vary much, but in temperate regions light and temperature fluctuate considerably both in the course of a day and from one season to another. On a warm summer day, light and temperature are generally well above their minimum value for plants living in the open, and carbon dioxide is the factor limiting photosynthesis. But in the cool of the early morning or evening, light or temperature may become limiting factors, as they do in the winter. Habitat is also important: for plants living in shady place such as the floor of a forest or wood, light will be the limiting factor most, if not all, the time. ...read more.

Relationship between forest net primary productivity and annual precipitation Adapted from H. Lieth. 1973. Primary production: terrestial ecosystems. Human Ecology 1: 303-332. This Moderate Resolution Imaging Spectroradiometer (MODIS) allows scientists to gauge our planet's metabolism on an almost daily basis. This composite image over the continental United States, acquired during the period March 26th April 10, 2000, shows regions where plants were more or less productive i.e., where they 'inhaled' carbon dioxide and then used the carbon from photosynthesis to build new plant structures. The false-color image below provides a map of how much carbon was absorbed out of the atmosphere and fixed within land vegetation. Areas colored blue show where plants used as much as 60 grams of carbon per square meter. Areas colored green and yellow indicate a range of anywhere from 40 to 20 grams of carbon absorbed per square meter. Red pixels show absorption of less than 10 grams of carbon per square meter and white pixels (often areas covered by snow or masked as urban) show little or no absorption. This is one of a number of new measurements that MODIS provides to help scientists understand how the Earth's landscapes are changing over time. Scientists' goal is use of these GPP measurements to refine computer models to simulate how the land biosphere influences the natural cycles of water, carbon, and energy throughout the Earth system. ...read more.