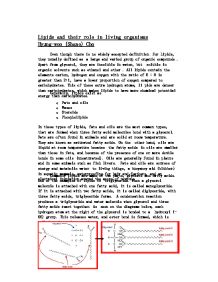 Lipids and their role in living organisms.

Lipids and their role in living organisms Hyung-woo (Shane) Cho Even though there is no widely accepted definition for Lipids, they usually defined as a large and varied group of organic compounds. Apart from glycerol, they are insoluble in water, but soluble in organic solvents such as ethanol and ether. All lipids contain the elements carbon, hydrogen and oxygen with the ratio of H : O is greater than 2:1, have a lower proportion of oxygen compared to carbohydrates. This of these extra hydrogen atoms, lipids are denser than carbohydrates, which makes lipids to have more chemical potential energy than carbohydrates. Generally, lipids exist as o Fats and oils o Waxes o Steroids o Phospholipids In these types of lipids, fats and oils are the most common types, that are formed when three fatty acid molecules bond with a glycerol. Fats are often found in animals and are solid at room temperature. They are known as saturated fatty acids. On the other hand, oils are liquid at room temperature because the fatty acids in oils are smaller than those in fats, and because of the presence of one or more double bonds in some oils (unsaturated). ...read more.

Waxes occur as the water-repellent cuticles of the plant epidermis and of the exoskeleton of insects. Steroids have a structure of complex rings of carbon atoms. Also, Cholesterol, a steroid, is a component of cell membranes. Sex hormones, growth hormone and bile salts are produced from cholesterol. We have looked the structure, types and simple biological roles of lipids. Then why are lipids taking very important role in the living organisms? 1. One of the very important reasons that lipids are necessary is because it is used as a reserve energy source. As I have commented before, lipids have more chemical potential energy. Upon breakdown they yield 38kJ/g of energy, it is nearly twice as much energy on combustion as do carbohydrates, considering carbohydrates yield 17kJ/g. This is due to the fact that a fat has a greater proportion of H atoms to O atoms and is therefore capable of a greater oxidation. 2. Much energy is released during cellular respiration of fats. Lipids may act as a source of metabolic water. ...read more.

There are various types of lipids, fats & oils, steroids, waxes, and phospholipids. Triglyceride is one of the fats and oils, produced by condensation, reacting glycerol and three fatty acids react together to form ester bond and release water. Phospholipid is similar to a triglyceride, but have one fatty acid group replaced by a phosphate group. Waxes are esters formed from a fatty acid and a complex alcohol. Steroids have a structure of complex rings of carbon atoms. Lipids take very important part in the lives of living organisms. They store and release more energy, easy to store energy and heat since they are insoluble and a poor conductor of heat. Lipids are a component of cell membranes in the form of phospholipids, helps to protect critical organs to reduce mechanical injury. The oil secretion and waxes allows the plant cuticle and insect exoskeleton to reduce water loss and animal furs to be waterproof. Fats are important for the absorption of fat-soluble vitamins A, D,E and K by mammals. Lastly, some (sex) hormones are steroids, and lipids also occur in the sheath of nerves as an insulating layer around nerve fibres. ...read more.