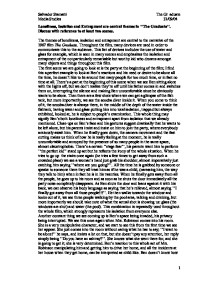 Loneliness, Isolation and Entrapment are central themes in ''The Graduate''. Discuss with reference to at least two scenes.

Loneliness, Isolation and Entrapment are central themes in ''The Graduate''. Discuss with reference to at least two scenes. The themes of loneliness, isolation and entrapment are central to the narrative of the 1967 film The Graduate. Throughout the film, many devices are used in order to communicate this to the audience. This list of devices includes the use of water and glass for example, which is seen in many scenes and emphasizes the isolation and entrapment of the not particularly remarkable but worthy kid who drowns amongst many objects and things throughout this film. The first scene we are going to look at is the party at the beginning of the film; I find this a perfect example to look at Ben's reactions and his need or desire to be alone all the time, he doesn't like to be around that many people for too much time, or in fact no time at all. There's a part at the beginning of this scene when we see Ben sitting alone with the lights off, but we don't realize they're off until his father comes in and switches them on, interrupting the silence and making Ben uncomfortable since he obviously wants to be alone. Then there are a few shots where we can get a glimpse of the fish tank, but more importantly, we see the scooba diver inside it. ...read more.

and water (the pool). This combination is repeatedly used throughout the whole film, which strongly represents his isolation from everyone else. Another constant thing we see coming up is Ben's space being invaded, his privacy being interrupted. We see this once again when Mrs. Robinson comes into his room. She is a very manipulative character, and we start to see this from the first time we see her appear. She just comes into the room without caring what he has to say; ''I want to be alone!'' he says, and insists a lot on that, but she doesn't pay any attention, her reply simply being ''Do you have an ashtray?''. She knows what she went there for, and she is going to get it; she is very determined. Ben's reaction to this whole act of Mrs. Robinson manipulating him and getting him to drive her home, and all the incidents at her house when they get home, can be interpreted as child-like. Ben doesn't know how to react, he has no idea whatsoever, he stutters a lot and is very nervous, he doesn't know what to do and hesitates all the time. The other scene I wanted to take into consideration is the one on his birthday. ...read more.

A possible interpretation of this is when Ben at the end comes out by himself, all the pressure put on him and all the things happening made him react. He is no longer a puppet whose' strings are being pulled, he becomes determined and is sure of what he wants, and he goes and gets it. I am talking about the whole ending scenes of him going after Elaine, specially the church scene. In this scene we see Ben banging against an enormous glass which separates the bottom part of the church from the upper floor, where the choir usually is. How often is this seen in a church? Practically never. It's also very ironic how Ben uses the Christian cross to keep the distance between him and Elaine and the rest of the people, and also how he uses it to lock them inside the church to buy them time to run away. Now it's all the people who are locked behind glass, which doesn't change much since Ben (and also Elaine now) is still as isolated as before. All throughout the film we see constant use of conventional codes which reflect many different things which most times have a subconscious effect on the audience. All these devices added up together have a very strong effect, clearly emphasizing all throughout the piece loneliness, isolation and entrapment. Aprox. 1200 Words Salvador Stamatti The Graduate Media Studies 31/09/04 1 ...read more.