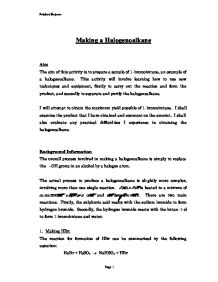 Making a Halogenoalkane Aim The aim of this activity is to prepare a sample of 1-bromobutane, an example of a halogenoalkane. This activity will involve learning how to use new techniques and equipment, firstly to carry out the reaction and form the product, and secondly to separate and purify the halogenoalkane. I will attempt to obtain the maximum yield possible of 1-bromobutane. I shall examine the product that I have obtained and comment on the amount. I shall also evaluate any practical difficulties I experience in obtaining the halogenoalkane. Background Information The overall process involved in making a halogenoalkane is simply to replace the -OH group in an alcohol by a halogen atom. The actual process to produce a halogenoalkane is slightly more complex, involving more than one single reaction. Butan-1-ol is heated in a mixture of concentrated sulphuric acid and sodium bromide. There are two main reactions. Firstly, the sulphuric acid reacts with the sodium bromide to form hydrogen bromide. Secondly, the hydrogen bromide reacts with the butan-1-ol to form 1-bromobutane and water. 1. Making HBr: The reaction for formation of HBr can be summarised by the following equation: NaBr + H2SO4 ? NaHSO4 + HBr There is also an unwanted side reaction that takes place at this stage. ...read more.

These will act as nuclei and will ensure that the liquid boils steadily and safely. Set up the apparatus in Figure 2, which will heat the mixture under REFLUX. Attach a guard tube filled with soda lime (CARE Irritant) to the top of the condenser. The soda lime within the guard tube absorbs any escaping gases, e.g. HBr and SO2. 6. Adjust the apparatus until the flask rests on a gauze and tripod. Make sure the condenser water supply is on. Gently heat the reaction mixture with a small flame until the mixture starts to boil and then allow it to REFLUX for between 30 minutes and 40 minutes. Condensed droplets should be falling back into the flask during reflux at a rate of about 1 drop per second. Covalent bond making and breaking takes a considerable amount of time. Refluxing solves the problem by raising the temperature, so that more reactant molecules are above their activation energies and are more likely to form the product. Process of Reflux: Figure 2 Apparatus for heating under reflux Part 2: Separating the product from the reaction mixture 7. Allow the reaction mixture to cool. The flask now contains 1-bromobutane and probably the following substances too: * Sodium bromide * Sodium hydrogensulphate * Sulphuric acid * Butan-1-ol * Hydrogen bromide * Bromine * Water * But-1-ene 8. ...read more.

The protonated butan-1-ol can eliminate a molecule of water and a H+ ion to form but-1-ene: This is called dehydration or elimination. Another way 1-bromobutane could have been lost is during the separation stages. I had to extract as well as I could the organic layer, taking no impurities from the other layer. This meant deliberately leaving some 1-bromobutane behind to avoid contamination of the product. The bromine that was produced made the separation easier because it coloured the organic layer, containing the halogenoalkane. Another practical difficulty was that the amount of mixture that I was dealing with, compared to the size of the apparatus, was extremely small. If I had to transfer the mixture from a piece of apparatus, then 100% of the mixture wasn't transferred. A very small amount remained to 'wet' the internal surface of the apparatus due to attractive forces. This was most pronounced when I had to transfer the product through a piece of cotton wool (see method stage 13). I lost a considerable amount of product, because cotton wool is so absorbent. I had to apply a fair amount of pressure to try and maximise the amount of liquid product. There aren't many ways to improve the experimental techniques in this practical. The main objectives would be to increase the production of the halogenoalkane, rather than the production of unwanted impurities, and also to improve the filtration techniques. Industry would have developed more efficient ways of obtaining 1-bromobutane. Pritchard Benjamin Page 1 ...read more.