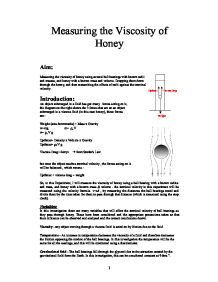 Measuring the Viscosity of Honey

Measuring the Viscosity of Honey

Measuring the viscosity of honey using several ball bearings with known radii
and masses, and honey with a known mass and volume. Dropping them down
through the honey, and then researching the effects of radii against the terminal
velocity.

Introduction:
An object submerged in a fluid has got many   forces acting on it,
the diagram on the right shows the 3 forces that act on an object
submerged in a viscous fluid (in this case honey), those forces
are :

but once the object reaches terminal velocity , the forces acting on it

will be balanced , which means :

So, in this Experiment, I will measure the viscosity of honey using a ball bearing with a known radius and mass, and honey with a known mass & volume . the terminal velocity in this experiment will be measured using the velocity formula  v=s/t , by measuring the distances the ball bearings travel and divide them by the time taken for them to pass through that distance (which is measured using the stop clock) .

Variables:
In this investigation there are many variables that will affect the terminal velocity of ball bearings as they pass through honey. These have been considered and the appropriate precautions taken so that their influence can be observed and analysed and the correct conclusions drawn.

Viscosity - any object moving through a viscous fluid is acted on by friction due to the fluid.

I believe this experiment is completely safe, as no sharp edges or hot liquids are used. Clamps and stands could be used as an extra precaution to prevent the cylinder from getting knocked over the table.

Honey is (obviously) a non-poisonous material, so it can be eaten off the hands safely, but I would suggest not to eat any honey due to its direct physical contact with the Lab's apparatus.

Then the "Mean" of the calculated densities was taken :

Mass of Honey= Mass of (Cylinder+Honey) – Mass of Graduated Cylinder

This Figure represents the points at where my measurements were taken

Variation of temperature – Though a thermometer should have been used in this investigation to monitor the temperature, I didn’t use one. That is because I considered that the temperature would stay constant if the experiment was done within a 2-hour period in the same Lab-room.

Friction - Frictional forces acting from the sides of the cylinder may have had a significant effect on the ball-bearings by opposing their motion. This may have produced anomalous results that gave the unexpected trends on the graphs. To eliminate this in a future investigation, a much wider cylinder should be used. Also tweezers can be used to hold the ball-bearing and emerge it within the honey (at the centre) before letting it fall, this will let the ball-bearing bypasses the force affected on it by the surface tension of honey as well as preventing it from slipping towards the sides of the cylinder.

The most unusual trends/anomalies were found at the ball-bearings with the big radii, and this is because those ball-bearings had high terminal velocities, i.e.: they could move so fast downwards which made the measurements more inaccurate; and this supports my idea of using ball-bearings with smaller radii to achieve more accuracies, as it reduces the rate of the human error when starting/stopping/switching the stop-clocks.