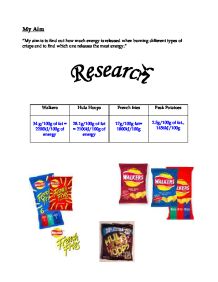 &quot;My aim is to find out how much energy is released when burning different types of crisps and to find which one releases the most energy.&quot;

“My aim is to find out how much energy is released when burning different types of crisps and to find which one releases the most energy.”

The preliminary experiment we had to record the amount of energy released.

I had to burn two different types of pasta and then put it under a test tube of 25cm of water. I did this experiment for practice before I did the crisp experiment. We also collected variables, fair testing points, and risk assessment from this experiment.

The variables that will affect the way the experiment works are:

The variables I will keep the same to make it a fair test will be the amount of water, which will be 20cm. The glass thickness, how much food is burnt before putting it under test tube- to make this fair we will move the crisp as soon as its alight.

I set up the apparatus like the diagram beneath.

We got 3 samples of 1 type of crisp to start with and recorded the weight of the first crisp, then put 20cm of water in the test tube and recorded the temperature. We held the first crisp in the flame and as soon as it’s alight we held it directly under the test tube with tweezers. We then stirred the water and recorded the temperature again after the flame on the crisp had died. With the two temperatures we were able to work out the change in temp. To do this experiment to the next sample we had to change the water and allow the test tube to cool down, and weigh the next crisp. We had to do this before each sample of crisp type; we did 4 crisp types in total. We got an average for each crisp type by adding up the results from the 3 samples and dividing it by 3.

This experiment is fairly accurate but not 100%. To prove the reliability of the experiment we decided to do 3 trials of each crisp type and set to an average.

The reliability is good also if you make sure it’s a fair test.

The manufacturer most likely used a calorimeter to measure the energy value in their crisps. This would have been tested many times under very controlled circumstances. In a calorimeter, all the heat given off by the food is transferred to a known quantity of water, which rises in temperature. It takes 4.2 joules of heat to raise the temperature of 1g of water by 1oc.

I think I have anomalous results because of the way I held the walkers crisp as it is the only odd one; I think that maybe where the tweezers were holding the crisp. The results on my graph are meant to go up in a straight line but it doesn’t as the Walkers crisps result is out of place.

From my results I can see my prediction is heading in the right way. The crisps with the highest fat content are Hula Hoops with 34g and I predicted that this would have the highest amount of released energy which would be true if my Walkers results were correct.