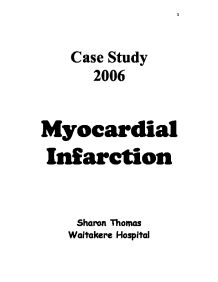 Case Study 2006 Myocardial Infarction Sharon Thomas Waitakere Hospital Abstract Of This Case Study Have you ever wanted to know what a Myocardial Infarction is and what its all about. Read on and find out through my eyes, about a patient I was caring for - what happened to him in both his body and mind. The following will show what a Myocardial Infarction ( MI ) is, what happens in the patients body and what care is involved by the medical and nursing teams. All of this to ensure my patient would walk out of hospital and again feel like productive member of society that he most certainly was before his cardiac event. Also within the body of this case study will be evidence based articles to support statements made. Congruent to this, will be reflection on how all that transpired with this man affected me and how my nursing practice has developed because of it. This patients health related journey and the anonymous intimacy that took place, came to a happy conclusion for both nurse and patient. Judith Christiansen's Nursing Partnership Model was published in 1990 and was developed in response to the knowledge gaps in the nursing system in New Zealand ( Taylor, 1995 ). This partnership model is a theoretical framework for nursing practice. It has 3 major concepts - these being nursing partnership, the passage and the context. Anonymous Intimacy is one of 3 elements of the contextual facet of the partnership model - the other 2 being episodic continuity and mutual benevolence. According to Watson ( 1992 ) she perceives nursing as being continuous when in reality it is a series of episodes. Separate nurses in separate episodes contribute to a single patients health related journey ( Christensen, 1990, p.33 ). And to me each nurse has " anonymous intimacy" with there patient. Each time I interacted with Mr T it was a privelege - he sanctioned personal closeness by a person he had not long met . ...read more.

Only some of these modifiable risk factors pertained to Mr T. He never smoked with only social alcohol consumption. His diabetes, mild obesity, physical inactivity and stress levels were something Mr T had control over. These issues would be addressed at a later point eg cardiac rehabilitation and with his GP Primary Diagnosis On admission to Coronary Care Unit via ECC Mr T was diagnosed as having had a Non - ST - Elevated Myocardial Infarction ( NSTEMI ).A non stemi is a syndrome in which the symptoms of coronary artery and ischemic heart disease increase in frequency. This occurs because the heart muscle is starved of needed oxygen. It is difficult to distinguish between unstable angina and a NSTEMI based on symptoms alone. The differentiating feature is that patients with NSTEMI have abnormal blood enzymes ( Troponin - discussed below ) proving that a heart attack has occurred. For many patients, it takes 6-12 hours to complete a series of blood enzyme tests to diagnose a NSTEMI ( Levin, 2000 ). Mr T's blood results were: * ( Peak Troponin - 0.22 ) Troponin is a protein that is released into the blood stream as a result of myocardial damage. It isn't present in healthy people so even minute amounts indicate damage ( WDHB Protocols ).The troponin test is usually ordered when a patient first comes into the emergency room - as did occur with Mr T. It is ordered again at 6 and 12 hours ( Peaking at 12 hours ) to assess trends of the enzyme. (American Association for Clinical Chemistry). It also is done to separate it from chest pain that may be due to other causes eg heart failure, stroke, pulmonary embolus, sepsis, myocarditis - to only mention a few ( WDHB Protocols - author unknown ). * ( Creatinine Kinase - CK - 188 ) CK is located in skeletal muscle and is not specific for myocardial injury. ...read more.

ST segment elevation can represent anything from a potentially life threatening condition to a normal variation, thus making it very important to diagnose what the cause of the ST Elevation is. Prompt diagnosis and treatment is essential ( Houghton & Gray, 2003 ). Part of the treatment for acute myocardial infarction is thrombolysis. However, one has to determine whether thrombolysis is indicated: According to ( WDHB Protocols ) indications for thrombolysis is * patients experiencing prolonged chest pain >30 minutes * ECG changes: significant ST Elevation * 2mm chest leads in 2 or more continuous leads * 1mm limb leads in any 2 continuous leads * New onset LBBB Heparin On going 8-9/10 Pain Bradycardia - Secondary to ischaemia Pathophysiology of a Myocardial Infarction The most common cause of an MI is narrowing of the coronary blood vessels due to arthrosclerotic plaques. Atherosclerosis - a disease in which fatty material is deposited on the wall of the arteries. This fatty material causes the arteries to become narrow and it eventually restricts blood flow. ( National Women's Health Information Centre ). When the plaque ruptures, platelet aggregation occurs and a thrombus forms. This results in partial or complete occlusion of the vessel and the ensuing myocardial ischemia occurs. Total occlusion of the vessel for more than 4-6 hours results in irreversible myocardial death, but reperfusion within this period can retrieve the myocardium and reduce morbidity and mortality (Stahmer, 2005 ) http://www.medicinenet.com/heart_attack_pathology_photo_essay/page3.htm Medications Allergy Status - Intolerant to beta-blockers ( severe bradycardia) Pre-Admission * Hytrin ( Terazosin ) 5mg PO Nocte * Candyl-D ( Piroxicam ), 10mg PO Daily * Losec ( Omeprazole ) 20mg PO Daily During Admission * As above - as well as * Asprin - Enteric Coated 100mg PO Daily * Simvistatin ( Lipex ) 40mg PO Nocte * Cilazapril 1mg PO Daily * Clexane (S/C) 12 hourly 100mg * Metformin 250mg PO twice daily o Non-Regular PRN Medications o GTN Spray o Morphine 2. ...read more.

This is an extremely well researched case study.
1. The referencing is good and the inclusion of information from primary sources excellent.
2. The report is well structured though its subheadings.
3. The use of key terms is outstanding.
4. Avoid the use of running commentaries.
*****