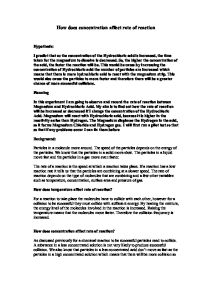 n this experiment I am going to observe and record the rate of reaction between Magnesium and Hydrochloric Acid.

How does concentration affect rate of reaction

In this experiment I am going to observe and record the rate of reaction between Magnesium and Hydrochloric Acid. My aim is to find out how the rate of reaction will be increased or decreased if I change the concentration of the Hydrochloric Acid. Magnesium will react with Hydrochloric acid, because it is higher in the reactivity series than Hydrogen. The Magnesium displaces the Hydrogen in the acid, so it forms Magnesium Chloride and Hydrogen gas. I will first run a pilot test so that so that if any problems occur I can fix them before

The rate of a reaction is the speed at which a reaction takes place. If a reaction has a low reaction rate it tells us that the particles are combining at a slower speed. The rate of reaction depends on the type of molecules that are combining and a few other variables such as temperature, concentration, surface area and pressure of gas.

How does temperature affect rate of reaction?

How does concentration affect rate of reaction?

As discussed previously for a chemical reaction to be successful particles need to collide. A substance in a less concentrated solution is not very likely to produce successful collision. We also know that particles in a less concentrated acid don’t move as fast as the particles in a high concentrated solution which means that there will be more collision so the probability of more successful collisions is increased. It is important to remember that that a chemical reaction will only take place when the colliding molecules have sufficient energy to form products.

How does surface area affect rate of reaction?

If one of the reactants is a solid then surface area will determine the rate of reaction . It is obvious that it will take longer for a bigger substance  to dissolve than a substance which has been broken into smaller pieces. If we would break the magnesium into smaller pieces then Cl- molecules can collide with many more particles of the magnesium. A big lump of any substance won’t get most out of the acid atoms which makes the reaction slow. Smaller particles have a greater surface are then bigger particles. Therefore the larger the surface area of the solid, the faster the reaction will be.

If you add a strip of Magnesium metal to hydrochloric acid, the Mg will dissolve and will form bubbles of hydrogen gas. When the Mg is dissolved, it forms positively charged magnesium ion (Mg2+). The H+ ion combines with two electrons and forms H2 gas. This only leaves magnesium and chlorine to combine.

Magnesium is an alkali earth metal, found in group two (S - Block) of the periodic table with electron configuration 2:8:2. We know that magnesium is quiet reactive and when heated it will burn with a brilliant white glow. Magnesium has two electrons in its outer shell, and by obeying the octet rule, that states during bonding an atom will try to gain eight electrons to get a full outer shell, it is obvious that for Magnesium it would much easier to lose two electrons, instead of gaining six. When magnesium looses two electrons it becomes a positively charged ion.

Hydrogen Chloride is an acid gas. When hydrogen chloride is dissolved in water, it forms an aqueous solution called hydrochloric acid, any
hydrogen halide is acidic, with acidity increasing going down the group, the halides are the non-metals in group 7 (P- Block).

Hydrochloric acid is an aqueous solution composed of H+ ions and CL- ions. To explain why hydrochloric will react with magnesium we can ignore the H+ ions for a moment because Mg is a positively charged ion so therefore the chemical reaction does not occur between H+ and Mg+. Due to electrostatic forces of Mg+ and the Cl- they attract each other and magnesium chloride is produced. The magnesium has a positive charge of two therefore it will attract two chloride ions. These to compounds will form an ionic bond. 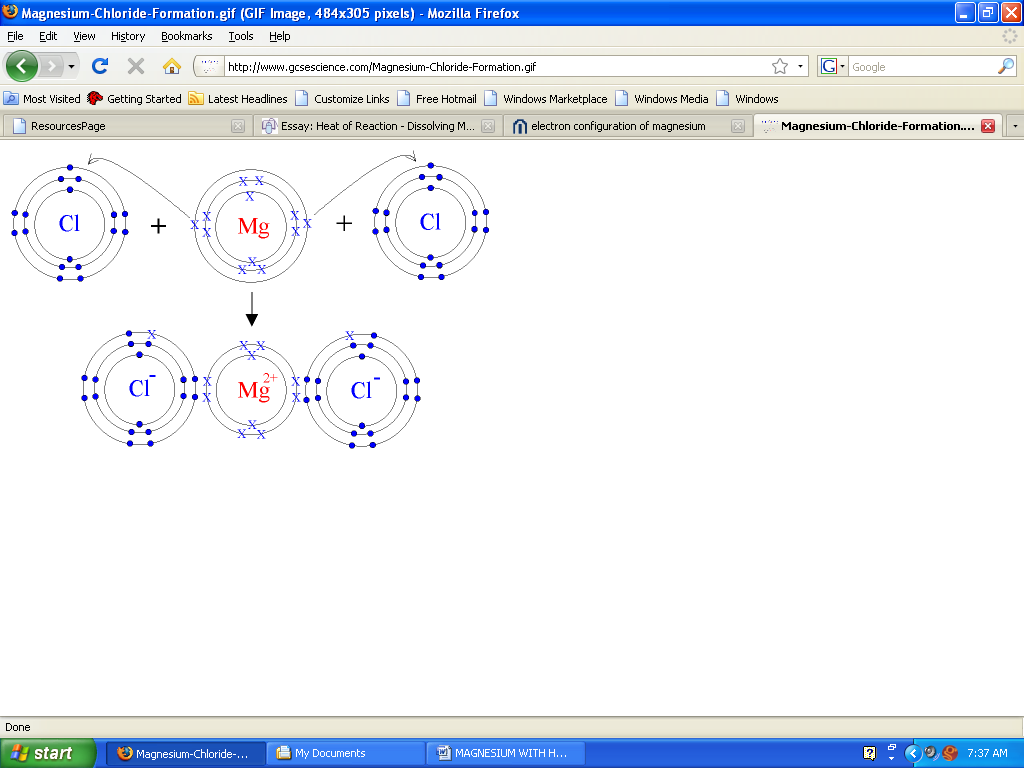 This has made sure that magnesium and chlorine are uncharged atoms. The H+ ion combines with two electrons and forms H2 which is hydrogen gas. Now no atom is left charged and no electrons will escape.