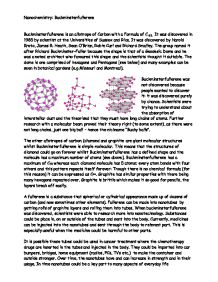 Buckminsterfullerene is an allotrope of Carbon with a Formula of C60.  It was discovered in 1985 by scientist at the Universities of Sussex and Rice. It was discovered by Harold Kroto, James R. Heath, Sean O’Brian, Robin Curl and Richard Smalley. The group named it after Richard Buckminster-Fuller because the shape is that of a Geodesic Dome and he was a noted architect who favoured this shape and the scientists thought it suitable. The dome is one comprised of hexagons and Pentagons [see below] and many examples can be seen in botanical gardens (e.g Missouri and Montreal). 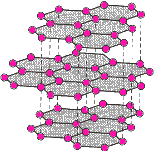 Buckminsterfullerene was not discovered because people wanted to discover it: it was discovered purely by chance. Scientists were trying to understand about the absorption of interstellar dust and the theorised that they must have long chains of atoms. Further research with a molecular beam proved their theory right (to some extent), as there were not long chains, just one big ball – hence the nickname “Bucky balls”.

The other allotropes of carbon (diamond and graphite are giant molecular structures whilst Buckminsterfullerene is simple molecular. This means that the structures of diamond could go on forever whilst Buckminsterfullerene has a defined shape and the molecule has a maximum number of atoms [see above]. Buckminsterfullerene has a maximum of C70 whereas each diamond molecule has 5 atoms; every atom bonds with four others and this pattern repeats itself forever: Though there is no chemical formula (for this reason) it can be expressed as C∞. Graphite has similar properties with there being many hexagons repeated over. Graphite is brittle which makes it so good for pencils, the layers break off easily.

A fullerene is a substance that spherical or cylindrical appearance made up of dozens of carbon (and now sometimes other elements). Fullerene can be made into nanotubes by getting rolls of graphite layers and rolling them into tubes. When buckminsterfullerene was discovered, scientists were able to research more into nanotechnology. Substances could be place in, on or outside of the tubes and sent into the body. Currently, medicines can be injected into the nanotubes and sent through the body to relevant part. This is especially useful when the medicine could be harmful to other parts.

It is possible these tubes could be used in cancer treatment where the chemotherapy drugs are inserted in the tubes and injected in the body. They could be imported into car bumpers, bridges, home equipment (radios, PCs, TVs etc.)  to make the container and outside stronger. Over time, the nanotubes have and can increase in strength and in their usage. In time nanotubes could be a key part to many aspects of everyday life

However, they are expensive to make at the moment and some research has shown that they could damage our health. If the tubes contained harmful substances that went to the wrong part of the body, we could possibly end up with physical or mental disabilities that could affect our children.

It is hard to review an essay which does not have the original task attached to it in the title. However, with regards to answering the question in relation to describing the buckminsterfullerene, then the student has answered well. Their ...

It is hard to review an essay which does not have the original task attached to it in the title. However, with regards to answering the question in relation to describing the buckminsterfullerene, then the student has answered well. Their response is clearly laid out, making it easier to follow and understand. The use of the diagram is good, however it lacks an appropriate title and the source that it was taken from. This is definitely a major flaw in the work. The presence of a bibliography is commendable, as the student acknowledges all the sources they have looked at to help them complete their work.

Analysis was not necessarily key to this piece of work. It is more about showing understanding of the structure and its discovery and uses. Their response is well structured and laid out. The fluency of the work is excellent as well. This all contributes to higher marks. I would suggest further developing the usage of the buckminsterfullerene and explaining the advantages and disadvantages with relation to the chemical structure to ensure that the highest marks are gained. Going that extra step usually helps the examiner identify the top level students.

One major problem with this work is the punctuation and grammar. The spelling is fine. The inconsistency with making letters upper or lower case along with errors such as the lack of closing a bracket after opening one should not be occurring at GCSE level. This makes it evident that the student did not check through their work, which consequently cost them some marks. The technical terms used in the work was used appropriately, however, higher marks could have been gained if they defined each of those terms as they went along (such as defining what an allotrope is). This would further demonstrate the understanding of the question by the student and gives the examiner no room for doubts.