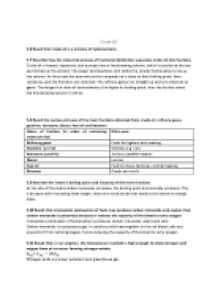 Notes on crude oil and its by-products.

﻿Crude Oil 5.6 Recall that crude oil is a mixture of hydrocarbons 5.7 Describe how the industrial process of fractional distillation separates crude oil into fractions Crude oil is heated, vaporised, and pumped into a fractionating column, which is coolest at the top and hottest at the bottom. The larger hydrocarbons sink whilst the smaller hydrocarbons rise up the column. As they near the area where the temperature is close to their boiling point, they condense, and the fractions are collected. The refinery gases rise straight up and are collected as gases. The longer the chain of hydrocarbons, the higher its boiling point, thus the further down the fractionating column it will be. 5.8 Recall the names and uses of the main fractions obtained from crude oil: refinery gases, gasoline, kerosene, diesel, fuel oil and bitumen Name of fraction (in order of increasing molecule size) Main uses Refinery gases Fuels for lighters and cooking Gasoline (petrol) Vehicles e.g. cars Kerosene (paraffin) Jet fuel, paraffin heaters Diesel Lorries Fuel oil Fuel for ships, factories, central heating Bitumen Roads and roofs 5.9 Describe the trend in boiling point and viscosity of the main fractions As the size of the hydrocarbon molecules increases, the boiling point and viscosity increases. This is because with increasing chain length, there are more bonds that need to be broken to change state. 5.10 Recall that incomplete combustion of fuels may produce carbon monoxide and explain that carbon monoxide is poisonous because it reduces the capacity of the blood to carry oxygen Incomplete combustion of hydrocarbons produces carbon monoxide, water and soot. ...read more.

A long chain hydrocarbon is put into a catalytic cracker where there is an absence of air, high temperatures of 600-700°C and a mixed catalyst of aluminium oxide to speed up the process. The result is a mixture of smaller saturated and unsaturated hydrocarbons/alkanes+alkenes. Cracking is an example of thermal decomposition and the break up is random. Synthetic Polymers 5.14 Recall that an addition polymer is formed by joining up many small molecules called monomers Monomers are small molecules that can join up to make a very large molecule called a polymer. e.g. Starch is a polymer made up of small glucose monomers The monomer in addition polymerisation is unsaturated, i.e. the monomer must have a double bond. This opens up to allow other monomers to join up to form the polymer. 5.15 Draw the repeat unit of addition polymers, including poly(ethene), poly(propene) and poly(chloroethene) http://scienceaid.co.uk/chemistry/organic/images/polymerisation.jpg Polyethene - http://www.scienceaid.co.uk/chemistry/organic/images/polypropene.jpg Polypropene - http://www.scienceaid.co.uk/chemistry/organic/images/pvc.jpg Polychloroethene - 5.16 Deduce the structure of a monomer from the repeat unit of an addition polymer Put the sticking out bonds back into a double bond. Do not forget the n 5.17 Recall that nylon is a condensation polymer 5.18 Understand that the formation of a condensation polymer is accompanied by the release of a small molecule such as water or hydrogen chloride Condensation polymers are formed by joining two different monomers so that they react together. ...read more.

But the conversion is so good at lower pressure anyway, it is not economically viable iii A vanadium(V) oxide catalyst Sppeds up the reaction First, burn sulphur in air: S(s) + O2(g) → SO2(g) React the sulphur dioxide with excess air 2SO2(g) + O2(g) â 2SO3(g) âH= -196 kJ/mol React this with concentrated sulphuric acid to produce oleum. Reacting SO3 with water would produce an uncontrollable fog. H2SO4(l) +SO3(g) → H2S2O7 (l) This is converted into twice as much concentrated sulfuric acid by careful addition of water. H2S2O7(l) + H2O(l) → 2H2SO4(l) 5.27 Recall the use of sulfuric acid in the manufacture of detergents, fertilisers and paints 5.28 Describe the manufacture of sodium hydroxide and chlorine by the electrolysis of concentrated sodium chloride solution (brine) in a diaphragm cell Sodium hydroxide and chlorine are produced by electrolysis in a diaphragm cell Chlorine and Hydrogen are discharged at the electrodes leaving a solution with ions Na+ and OH-, which bond to form NaOH(aq). 5.29 Write ionic half-equations for the reactions at the electrodes in the diaphragm cell Anode: 2CL-(aq) → CL2(g) + 2e- Oxidation of Cl- Cathode: 2H+(aq) + 2e- → H2(g) Reduction of H+ 5.30 Recall important uses of sodium hydroxide, including the manufacture of bleach, paper and soap; and of chlorine, including sterilising water supplies and in the manufacture of bleach and hydrochloric acid. Sodium Hydroxide → Bleach, Paper, Soap Chlorine → Sterilising drinking water, Bleach, Hydrochloric Acid ...read more.