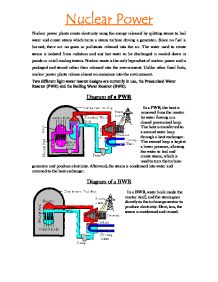 Nuclear Power Nuclear power plants create electricity using the energy released by splitting atoms to boil water and create steam which turns a steam turbine driving a generator. Since no fuel is burned, there are no gases or pollutants released into the air. The water used to create steam is isolated from radiation and any hot water to be discharged is cooled down in ponds or in tall cooling towers. Nuclear waste is the only byproduct of nuclear power and is packaged and stored rather than released into the environment. Unlike other fossil fuels, nuclear power plants release almost no emissions into the environment. Two different light-water reactor designs are currently in use, the Pressurised Water Reactor (PWR) and the Boiling Water Reactor (BWR). Diagram of a PWR In a PWR, the heat is removed from the reactor by water flowing in a closed pressurized loop. The heat is transferred to a second water loop through a heat exchanger. The second loop is kept at a lower pressure, allowing the water to boil and create steam, which is used to turn the turbine-generator and produce electricity. Afterward, the steam is condensed into water and returned to the heat exchanger. ...read more.

Many birds rely on the tide uncovering the mud flats so that they can feed. there are few suitable sites for tidal barrages. * Only provides power for around 10 hours each day, when the tide is actually moving in or out. Solar Power The photovoltaic solar cell is a semiconductor that converts light into electricity. As light strikes the surface of the cell it is absorbed and frees electrons in the top layer which are then trapped in the bottom layer. When the top and bottom layers are connected by an electric circuit, the electrons travel back to the top layer through the circuit creating an electric current.In this form of cell there are two layers of semiconductor material, one negative and the other positive. The layers are made mostly of silicon crystal with some impurities added (doping). In the top layer some of the silicon atoms (orange dots) have been replaced by an element that has one more electron such as phosphorous (green dots) which makes the layer negative (n-type layer) due to the extra electrons. In the bottom layer, some of the silicon atoms have been replaced by an element that has one less electron such as boron (red dots) ...read more.

Combined cycle plants use about 10 million gallons of water per day, consuming 7 million and putting 3 million gallons back into nearby rivers. Wave Energy There are several methods of getting energy from waves, but one of the most effective works like a swimming pool wave machine in reverse. At a wave power station, the waves arriving cause the water in the chamber to rise and fall, which means that air is forced in and out of the hole in the top of the chamber. We place a turbine in this hole, which is turned by the air rushing in and out. The turbine turns a generator. A problem with this design is that the rushing air can be very noisy, unless a silencer is fitted to the turbine. The noise is not a huge problem anyway, as the waves make quite a bit of noise themselves. Advantages * The energy is free - no fuel needed, no waste produced. * Not expensive to operate and maintain. * Can produce a great deal of energy. Disadvantages * Depends on the waves - sometimes you'll get loads of energy, sometimes nothing. * Needs a suitable site, where waves are consistently strong. * Some designs are noisy. * Must be able to withstand very rough weather. ...read more.