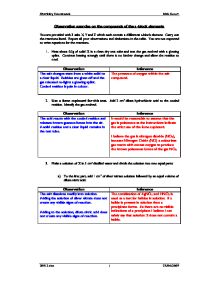 Observation exercise on the compounds of the s-block elements

Observation exercise on the compounds of the s-block elements You are provided with 3 salts X, Y and Z which each contain a different s-block element. Carry out the reactions listed. Report all your observations and deductions in the table. You are not expected to write equations for the reactions. 1. Heat about 0.5g of solid X in a clean dry test tube and test the gas evolved with a glowing splint. Continue heating strongly until there is no further change and allow the residue to cool. Observation Inference The salt changes state from a white solid to a clear liquid. Bubbles are given off and the gas released re-lights a glowing splint. Cooled residue is pale in colour. The presence of oxygen within the salt compound. 2. Use a fume cupboard for this test. Add 2 cm3 dilute hydrochloric acid to the cooled residue. Identify the gas evolved. Observation Inference The acid reacts with the cooled residue and releases brown gaseous fumes into the air. A solid residue and a clear liquid remains in the test tube. It would be reasonable to assume that the gas is poisonous as the instructions indicate the strict use of the fume cupboard. ...read more.

5. Add 1 cm3 of dilute hydrochloric acid to the cooled residue. Observation Inference The dull grey creamy solid reacts energetically with the hydrochloric acid and produces bubbles, which indicate the releasing of a colourless gas. The reaction forms a white residue along with a clear liquid at the bottom of the test tube. If the salt does contain either a metal carbonate or a metal hydrogen carbonate then a reaction with an acid would be energetic and form a salt, water and carbon dioxide. The gas in this reaction is likely CO2 and the remaining white residue a salt with the clear liquid being water. Group 1 carbonates exist as solids whereas you will only find group 2 carbonates in solution. I believe we are looking for a group 1 carbonate. 6. Make a solution of about 0.5g of solid Y in 5 cm3 of distilled water and divide the solution into two equal parts: a) To the first part, add 1 cm3 of silver nitrate solution followed by an equal volume of dilute nitric acid. Observation Inference The silver nitrate turns the solution a milky cream colour with obvious signs of white and yellow residue in the liquid. ...read more.

Indicating that the salt contains just a chloride. 8. Identify the cations in X, Y and Z using flame tests. Observation Inference X - Lilac flame Y - Orange and Yellow flame Z - Brick Red flame The presence of potassium as the K+ ion. The presence of sodium as the Na+ ion. The presence of calcium as the Ca2+ ion. 9. Make a solution of 1.0g of Y in 5 cm3-distilled water and add it to a solution of 1.0g of Z in 5 cm3-distilled water. Heat the mixture. Observation Inference The combined solutions bubble quickly in a blue flame and the solution boils over the test tube. Heavy concentration of a cloudy grey gas released, which puts out a flame. If solution Y is sodium hydrogen carbonate and solution Z is calcium chloride then when I heated the combined solutions the products would be Calcium Carbonate, Sodium Chloride, water and carbon dioxide in the equation: 2NaHCO3 (aq) + CaCl2 (aq) CaCO3 (aq) + 2NaCl (aq) + H2O (l) + CO2 (g) This would explain the concentration of the gas released, which would be composed of carbon dioxide capable of putting out a flame and some water vapour. Write the formulae of: X Y Z KNO3 NaHCO3 CaCl2 Chemistry Coursework Nick Curum Compounds of the s-block elements 1 27/04/2007 ...read more.