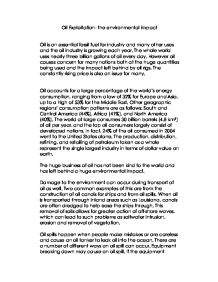 Oil Exploitation- the environmental impact Oil is an essential fossil fuel for industry and many other uses and the oil industry is growing each year. The whole world uses nearly three billion gallons of oil every day. However oil causes concern for many nations both at the huge quantities being used and the impact left behind by oil rigs. The constantly rising price is also an issue for many. Oil accounts for a large percentage of the world's energy consumption, ranging from a low of 32% for Europe and Asia, up to a high of 53% for the Middle East. Other geographic regions' consumption patterns are as follows: South and Central America (44%), Africa (41%), and North America (40%). ...read more.

When oil is transported through inland areas such as Louisiana, canals are often dredged to help ease the ships through. This removal of soils allows for greater action of off-shore waves, which can lead to such problems as saltwater intrusion, erosion and removal of vegetation. Oil spills happen when people make mistakes or are careless and cause an oil tanker to leak oil into the ocean. There are a number of different ways an oil spill can occur. Equipment breaking down may cause an oil spill. If the equipment breaks down, the tanker may get stuck on shallow land. When they start to drive the tanker again, they can put a hole in the tanker causing it to leak oil. ...read more.

If they are not aware of other animals, they face the extreme danger of being eaten. Sea otters, killer whales and small organisms such as plankton also are affected by oil spills. Oil spills sometimes are the reason for animals becoming endangered. Many things are being done to try and stop oil spill so this is a positive thing. If everyone around the world decided to use less oil, we would lower the risk of a large spill. If there were a spill, we wouldn't be dumping as much oil into the ocean, which would mean that there would be fewer animals killed or injured. This would also have a positive impact on our environment. You can help decrease oil spills by using less electricity and gasoline, which are both made with oil. ...read more.