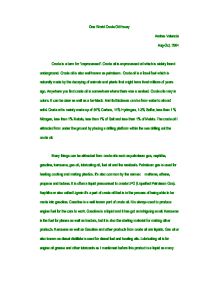 Gasoline is a liquid and it has got an intriguing smell. Kerosene is the fuel for planes as well as tractors, but it is also the starting material for making other products. Kerosene as well as Gasoline and other products from crude oil are liquids. Gas oil or also known as diesel distillate is used for diesel fuel and heating oils. Lubricating oil is for engine oil grease and other lubricants as I mentioned before this product is a liquid as many others. Then comes heavy oil, also known as fuel gas. This helps to make industrial fuel as well it is an item to make other products. Last but not least you have the residuals. This is the one of the products that is extracted from crude oil that is not a liquid. ...read more.

Now comes the problem that we have to get ready to start inventing or discovering something that can replace crude oil and that is going to be pretty hard since it is a one of a kind thing. Also a lot of the things extracted from crude oil are harmful to earth and are polluting it. Things like gasoline and kerosene. Which are use frequently in our know a day lifes. Just think of how many flight take off every day, and how many cars drive every day then you are able to realise how harmful and how much crude oil we use. Overall crude oil has its pros. and cons. It all depends on its uses and the quantity that it is used. If we start using limited amount of crude oil not only would we be not wasting it but also we would be keeping our environment free from pollution. ...read more.