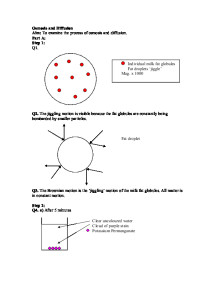 Osmosis and Diffusion Aim: To examine the process of osmosis and diffusion. Part A: Step 1: Q1. Q2. The jiggling motion is visible because the fat globules are constantly being bombarded by smaller particles. Q3. The Brownian motion is the 'jiggling' motion of the milk fat globules. All matter is in constant motion. Step 2: Q4. a) After 5 minutes b) After 24 hours The potassium permanganate will have spread throughout the beaker as the water molecules are constantly moving around. Step 3: Q5. The salt that was placed on the egg turned into 'sweat' like beads on the egg. Q6. There is a higher water concentration inside the egg, causing the water to travel through the egg to the salt. ...read more.

b) If a marine jellyfish was placed in a bucket of freshwater, the water will enter the jellyfish's body, it will then become swollen and it or its cells mould burst. Q11. A shark can move from freshwater into salt water and vice versa because of three adaptations/features. These features are gills, urine and its skin. The shark's skin is thicker; this restricts the water molecules from entering. The shark can regulate the flow of water by urinating, if it takes in too much water. Q12. By using a strong solution of malasses, the gardener would be able to kill only the nematodes. If the gardener were to use the salt solution (NaCl) it would do the same job but in the process, would kill the plants causing them to shrivel. Kristen Burridge Year 11 Biology Osmosis and Diffusion ...read more.