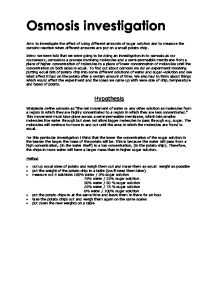 Intro: we were told that we were going to be doing an investigation in to osmosis as our coursework, osmosis is a process involving molecules and a semi-permeable membrane from a place of higher concentration of molecules to a place of lower concentration of molecules until the concentration on both sides is equal. To find out about osmosis we did an experiment involving putting equal bits of potato chip into some different solutions of water and sugar–solution and see what affect it had on the potato after a certain amount of time. We also had to think about things which would affect the experiment and the ideas we came up with were size of chip, temperature and types of potato.

My graph gives the line of best fit for the change in mass of the potato chips over the course of the experiment. There is a pattern on my graph and this is that as the amount of the solution increases, the change in mass decreases. The graph goes down on a steep gradient but I think that the line will eventually even out, I think this because the potato chip will eventually becoming as flaccid as it possibly can. The line of best fit that has been put in, you can see that all of my points were very close to creating a perfectly smooth curve. This shows that my results are fairly reliable apart from the second one, this might of happened because of one of the variables we have previously discussed might have happened. My graph fits in with my prediction which I made.

The cutting of the potatoes was the most difficult part of the experiment because I was recording my results by mass; it could have affected the surface area and the overall rate of osmosis. If I were to repeat the experiment I would have possibly (if there is such a thing) found a machine to cut the potato as it would make sure that all the potatoes would be the same weight and size. As well as the potato I could have found a more accurate way to measure out the solutions, if I could do this it would make sure that I have an accurate amount of liquid in each beaker. I could also weigh each chip on a more accurate scale for example not to 0.00g but to 0.0000g if I had a better set of scales.

There was not any out of the ordinary results, but one was not as close to the line as the others. This may have been caused by myself or my partner.  This may have been when the potato chips were removed from the beakers and dried I may well have dried some potatoes more than others this might make some have more excess water, which would add to the mass. If the experiment was repeated I could find another way to dry the potatoes that would ensure that all the potatoes were dried in the same way for the same time. However I think that the experiment was successful and I was pleased with my results and with my prediction. us

In conclusion I can say that the movement of water through semi permeable membrane of a potato is affected by concentration of sugar solution. The higher the concentration of glucose solution, the more the potato chip will lose its weight and size.