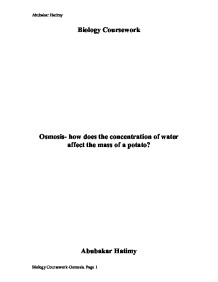 Osmosis - how does the concentration of water affect the mass of a potato?