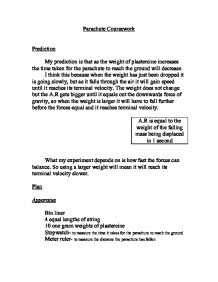 Parachute Coursework Prediction My prediction is that as the weight of plastercine increases the time taken for the parachute to reach the ground will decrease I think this because when the weight has just been dropped it is going slowly, but as it falls through the air it will gain speed until it reaches its terminal velocity. The weight does not change but the A.R gets bigger until it equals out the downwards force of gravity, so when the weight is larger it will have to fall further before the forces equal and it reaches terminal velocity. A.R is equal to the weight of the falling mass being displaced in 1 second What my experiment depends on is how fast the forces can balance. So using a larger weight will mean it will reach its terminal velocity slower. ...read more.

These are some of the pre-test results:- Length of string (cm) Time (s) Weight (g) 10 2.41 1 10 2.28 1 40 4.23 1 40 4.85 1 We found that with short pieces of string the parachute could not open to its full surface area therefore reducing the amount of A.R which can be placed on it, also with the longer pieces of string the parachute tended to collapse in on its self making the whole thing plummet to the ground. How we made the parachute To make the parachute we made cut four equal lengths of string, and after cutting the bin liner to the correct dimensions attached the string to the 4 corners, we then grouped the string together and tied a knot in the end of them, we would then add one gram of plastercine at a time until the maximum amount was met. ...read more.

much slower rate than at any other time in the experiment, I believe this to be because the weight is the right size for the canopy to equally balance the forces out quickly. To a reasonable extent my results support my prediction apart from the one out of line result which I explained before. The results do show that the greater the weight is on the parachute the longer it takes to reach its terminal velocity making it gain more speed in its freefall before the A.R balances, even though it may have only decreased in time by a fraction of a second each time. Improvements To test my theory further I could try different areas of canopies, a larger range of weights and different lengths of string also I could find a more reliable form of measuring the speed / time taken for the parachute to reach the ground. ...read more.

This is a well structured and well written report.
1. The report needs to have an introduction that contains researched information.
2. Several sections are missing from the plan, such as a variables section.
3. The conclusion needs to quote data and explain the patterns.
4. The evaluation is very brief.
****