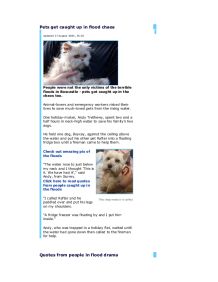 Pets get caught up in flood chaos

Pets get caught up in flood chaos Updated 17 August 2004, 15.36 People were not the only victims of the terrible floods in Boscastle - pets got caught up in the chaos too. Animal-lovers and emergency workers risked their lives to save much-loved pets from the rising water. One holiday-maker, Andy Trethewy, spent two and a half hours in neck-high water to save his family's two dogs. He held one dog, Boycey, against the ceiling above the water and put his other pet Rafter into a floating fridge box until a fireman came to help them. This chap made it to safety Check out amazing pix of the floods "The water rose to just below my neck and I thought 'This is it. We have had it'," said Andy, from Surrey. Click here to read quotes from people caught up in the floods "I called Rafter and he paddled over and put his legs on my shoulders. "A fridge freezer was floating by and I put him inside." Andy, who was trapped in a holiday flat, waited until the water had gone down then called to the fireman for help. Quotes from people in flood drama Updated 17 August 2004, 16.03 Here's what the people caught up in the terrible Boscastle floods had to say... "I was in the B&B watching all the water come down, then all these cars started to float past. ...read more.

But it's hard because we're living in a three-bedroom house with six people in it, so it's quite crowded. I have to put up with my brother and cousin as I'm sleeping in my cousin's room. And there have been a few arguments over who uses the bathroom in the morning, but I just have to get on with it. My pets are all fine after the flood, but the cat has been in a cat home because we couldn't keep her here. But it's coming back today as it's not fair to keep her there. The future I'm not sure when we'll get to move back into our house. We're arranging building work to be done to get things fixed. A lot of ceilings were damaged upstairs so they'll have to be repaired. I'm quite disappointed that it won't be before Christmas, but I'm looking forward to next year. I think that I've coped quite well since the flood. It still hurts that the flood happened and ruined the house, but I'm moving on. The only positive thing to come out of this is that we'll get to redecorate our house now. I've already chosen what colour my bedroom will be - pink and purple with furry lights." Julie, 13, Boscastle Boscastle victims finally go home Updated 26 August 2004, 14.45 People whose homes were damaged when flash floods swept through the Cornish village of Boscastle are finally being allowed back into their properties. ...read more.

Devon and Cornwall police have set up an emergency phone line for anyone concerned about friends or relatives - 08705 329567. Prince visits Cornish flood town Updated 18 August 2004, 16.08 Prince Charles is visiting the Cornish village of Boscastle, which was hit by flash flooding after heavy storms. With more rain forecast, Prince Charles visited the area to see how people were coping with the clean-up after rising waters caused huge damage on Monday. Although no-one is thought to have been killed, police are using sniffer dogs to check through the debris. Villagers won't be allowed to return home for some time, as police are still making sure the buildings are safe. Click here to read Lizo's report on what it's like being in Boscastle The village recovers Two local rivers burst their banks after 75mm of water - the August average rainfall - fell in two hours. Half of the village remains sealed off by police, who are carrying out a "sweep" of buildings and vehicles. Click to see pix of the clean-up operation One villager said the floods had brought local people together. He said there was "a great team spirit, everyone helping everyone else". Many parts of the UK have been struck by wet and windy weather in recent days, and more rain and high winds are forecast across the country. Click here to find out why flash floods happen Devon and Cornwall police have set up an emergency phoneline for anyone concerned about friends or relatives - 08705 329567. ...read more.