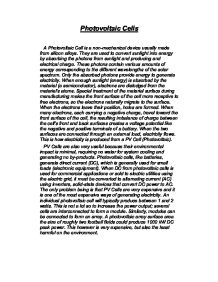 A Photovoltaic Cell is a non-mechanical device usually made from silicon alloys. They are used to convert sunlight into energy by absorbing the photons from sunlight and producing and electrical charge. These photons contain various amounts of energy corresponding to the different wavelengths of the solar spectrum.Only the absorbed photons provide energy to generate electricity. When enough sunlight (energy) is absorbed by the material (a semiconductor), electrons are dislodged from the material's atoms. Special treatment of the material surface during manufacturing makes the front surface of the cell more receptive to free electrons, so the electrons naturally migrate to the surface. When the electrons leave their position, holes are formed. When many electrons, each carrying a negative charge, travel toward the front surface of the cell, the resulting imbalance of charge between the cell's front and back surfaces creates a voltage potential like the negative and positive terminals of a battery. When the two surfaces are connected through an external load, electricity flows.

When the sun is directly overhead, the distance, which the sun’s rays have to travel through the atmosphere to a PV Cell, is clearly at a minimum. The characteristic spectral power distribution of solar radiation that is observed under these conditions is known as the Air Mass 1 distribution.

An Air Mass distribution of 1.5, is the standard test conditions, therefore when the sun is at an angle of 48 degrees that is the ideal test conditions for PV Cells, as:

IE achieving the standard test conditions for a PV Cell.

According to the quantum theory of

radiation into electricity. Another main reason is that some Photons are reflected of the surface of a PV Cell instead of being absorbed.

One very simple way of envisaging a typical 100 square centimeter silicon PV cell is as a solar powered battery. 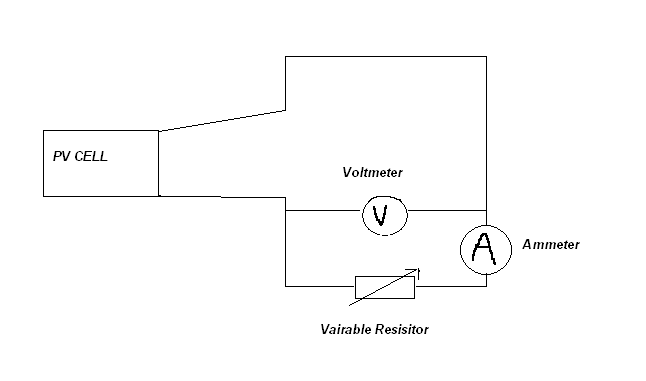 When the resistance is infinite (i.e. when the cell is, in effect, not connected to any resistance, or ‘open circuited’) the current in the circuit is at its minimum (zero) and the voltage across the cell is at its maximum, known as the ‘open circuit voltage’ (Voc). At the other extreme, when the resistance is zero, the cell is in effect ‘short circuited’ and the current in the circuit then reaches its maximum, known as the ‘short circuit current’ (Isc).

The maximum power is when internal resistance is equal to the resistance of the external load.