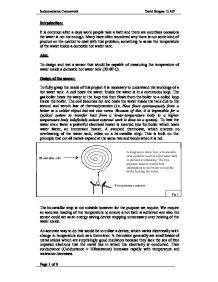 It is common after a days work people take a bath and there are countless occasions the water is not hot enough. Many have often wondered why there is not some kind of product on the market to deal with this problem, something to sense the temperature of the water inside a domestic hot water tank.

To design and test a sensor that would be capable of measuring the temperature of water inside a domestic hot water tank (20-80˚C).

Design of the sensor:

To fully grasp the needs of this project it is necessary to understand the workings of a hot water tank. A coil heats the water. Inside the water is in a continuous loop. The gas boiler heats the water in the loop this then flows from the boiler to a coiled loop inside the boiler. The coil becomes hot and heats the water inside the tank due to the second and zeroth law of thermodynamics (i.e. Heat flows spontaneously from a hotter to a colder object but not vice versa. Because of this, it is impossible

Both circuits would deliver results. However, my concern, which I shared with my teacher, is that the Wheatstone bridge is too sensitive for my sensor application and with the bead thermistor I plan to use would make my circuit very sensitive. Any slight heat change encountered would make the meter fluctuate so much that it would be inconvenient to have so many changes in meter reading.

So it was then decided that a potential divider circuit would be most suitable. The final decision to be made on the fixed resistor will be described later on in the piece.

Through previous experience, research and general advice temperature is typically a difficult thing to experiment with, as it is notoriously hard to control and keep a stable temperature. To combat this problem I acquired an electric hot plate with magnetic stirrer. The hot plate would slowly heat the water in a manner that would be difficult to obtain with a Bunsen burner. The magnetic stirrer would ensure thermal equilibrium was reached quickly. Another issue to be considered is the value of the fixed resistor. My research and my physics teacher confirmed that a calibration curve would be produced from this experiment. The colour change (Fig 4)

Run 1 was not a failure, it simply showed systematic drift. The same trend was shown as in Run 2 however; the curve was closer to the X- axis. To conclude this project, I believe I have fulfilled my aim and have designed a sensor to measure the temperature inside a domestic hot water tank. The sensor may have to be re-engineered slightly to cope with the un-uniform heating inside the tank as described above. I also believe that for the sensor to work a battery would not be suitable as a power source. The battery would loose energy over time and for this sensor to work it is calibrated on the assumption that the battery’s energy is not lost over time. Therefore giving a false temperature reading meaning that the sensor is rendered useless. It would be more suitable to use an adaptor from the mains converting the alternating current to direct current and also stepping down the voltage. In the lab I used a battery however, simply to test the sensor and this experiment has proves successful and shown that the thermistor could show the user the temperature of hot water inside a tank with sufficient resolution between 20-80ºC.