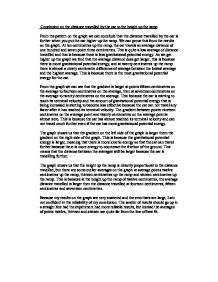 Divide both sides by the Mass: (Velocity) squared = 2 x X amount of J

Velocity = The square root of: 2 x X amount of J

Explanation of my conclusion

The results of the graph should be a straight line through each average and the error bars should be fairly small. This is because in the experiment the factors for each point should each point should be the same apart from the variable that I am changing and the distance travelled. The distance of the car is affected by the gravitational potential energy, which then changes into kinetic energy, the friction and the work done of the car. As the car comes down the ramp it should keep on gaining more and more speed due to the gravitational potential energy that the car has until it reaches its terminal velocity. Then as the car comes off the ramp the energy is converted into kinetic energy and the ground should starts to apply friction to the work done by the car and eventually slows the car down. The friction that is applied should be the same each time if the car goes down the same surface each time.