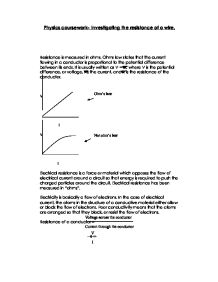 Physics coursework- Investigating the resistance of a wire.

Physics coursework- Investigating the resistance of a wire.

Resistance of a conductor =

The wires which the electrons travel through vary from different lengths and widths.

When the wire is thin, there are lots of atoms for the electrical current to pass so there is a large resistance.

We made sure we had our hair tied up when do the experiment in case our hair got caught in the wire and burned. We also did the same with our ties, tucking them under our jumpers in case they also come in contact with the wire.

We thought that this method was a much better way than in our preliminary experiment because in our first attempts, we measured at every 10 cm and only used one type of wire. This caused us to have unreliable results and not having a big difference in the numbers too. Using these new numbers to measure the wire with gave us a big difference in numbers in our results and made them more reliable. Furthermore, using copper, constantan, manganese and nickel chrome made a real difference in our results as we could see how the thickness of the wire affected the resistance.

We decided to do five repeats of each length of wire.

I think my method worked quite well but if I could redo my method again, I would change it a little bit. I found that in our method we got much more results and for each length of wire, the measurements were closely the same. What I found was that for the wires nickel chrome and manganese, the average went very high by the time we got to 90 cm whereas the wires copper and constantan were quite low. So instead of measuring at 90 cm, we could have gone slightly lower down. We made sure our hair was tied up and our ties were tucked in throughout the experiments.

We don't need to improve our equipment list because the equipment alone itself worked quite effectively.

I think that my data is accurate and reliable because we did five repeats of each wire meaning that we get more results and data which will make us be able to outline any outliers and will help to prove my question that I am investigating.

Further data which could be collected to improve the reliability of my results are a bigger range of materials and lengths so this way we would get even more results and this would make everything even more reliable.