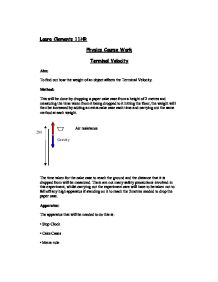 Laura Clements 11HR Physics Course Work Terminal Velocity Aim: To find out how the weight of an object affects the Terminal Velocity. Method: This will be done by dropping a paper cake case from a height of 2 metres and measuring the time taken from it being dropped to it hitting the floor, the weight will then be increased by adding an extra cake case each time and carrying out the same method at each weight. The time taken for the cake case to reach the ground and the distance that it is dropped from will be measured. There are not many safety precautions involved in this experiment, whilst carrying out the experiment care will have to be taken not to fall off any high apparatus if standing on it to reach the 2metres needed to drop the paper case. Apparatus: The apparatus that will be needed to do this is: � Stop Clock � Cake Cases � Metre rule Variables: The variables that might affect ...read more.

Terminal velocity is when the air resistance becomes equal to the gravity force and so acceleration stops, the object cannot go any faster it has reached terminal velocity. At the instant of release there is no friction because the object is not moving. The weight of the object makes it accelerate downwards, because gravity is acting on it, the heavier the object the faster it will accelerate. Because gravity is a constant force, it always stays the same; the velocity and the air resistance have to increase to balance it. So unless the weight of the paper case changes there is always the same force of gravity acting on it. So it is expected that there will be a straight line of best fit on our graph of results. Analysis: The results gained from the experiment show that my prediction was correct, as the amount of Newtons increase the terminal velocity is faster, the shorter time it takes for it to hit the ground. ...read more.

3.15m/s is the average increase in the terminal velocity each time another paper cake case is added. This shows that adding extra weight increases the terminal velocity quite significantly. This is because terminal velocity is when the air resistance becomes equal to the gravitational force acting on the object and so the acceleration stops. The heavier the object the shorter time it takes for it to reach its terminal velocity. Evaluation: I think the experiment worked quite well, a lot of reliable results were obtained which could be analysed easily and this meant we were able to fulfil our aim. Most of the results are quite reliable; we did 6 experiments at each weight and took an average, which meant they were quite reliable. But because of human error they may not have been as reliable as they could have been, especially as the number of paper cases, and so the weight, increased. We could have improved the experiment by using data logging, electronic sensors, to drop the paper cases through, this would have eliminated human error. ...read more.

This is a nice first attempt at a report.
1. The use of subheadings to give the report structure is good, although some sections are missing.
2. The use of a diagram to illustrate a scientific concept is good.
3. The report needs an introduction that includes relevant information.
4. The report is missing a results table and graph.
*** (3 stars)