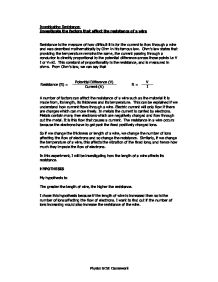 Investigate the factors that affect the resistance of a wire

Resistance is the measure of how difficult it is for the current to flow through a wire and was described mathematically by Ohm in his famous law.  Ohm's law states that providing the temperature remains the same, the current passing through a conductor is directly proportional to the potential difference across those points i.e V  I or V=kI.  This constant of proportionality is the resistance, and is measured in ohms.  From Ohm’s law, we can say that

A number of factors can affect the resistance of a wire such as the material it is made from, its length, its thickness and its temperature.  This can be explained if we understand how current flows through a wire. Electric current will only flow if there are charges which can move freely. In metals the current is carried by electrons. Metals contain many free electrons which are negatively charged and flow through out the metal. It is this flow that causes a current.  The resistance in a wire occurs because the electrons have to get past the fixed positively charged ions.

In this experiment, I will be investigating how the length of a wire affects its resistance.

The greater the length of wire, the higher the resistance.

I chose this hypothesis because if the length of wire is increased then so is the number of ions affecting the flow of electrons. I want to find out if the number of ions increasing would also increase the resistance of the wire.

I will be using the following equipment to carry out this experiment.

This is a diagram showing how the equipment will be set up:

I will carry out the experiment by following the steps below making sure I keep it a fair test and record my results accurately as possible.

In order to make sure that my experiment is a fair test I will take certain precautions:

Leaving the battery pack running (on) when I don’t take any readings would allow the current to keep passing through the wire, eventually heating it up. This would cause the resistance of the wire to increase.

As I am using crocodile clips in this experiment and want the length of the wire to be as accurate as possible, I will measure from the outside edge of the clip every time I conduct the experiment with a different wire length.

Whilst measuring the wire, I will straighten it out to its maximum length and measure it as accurately as possible with a ruler which will ensure that the length of the wire is known and stated.

Whilst doing the experiment I must abide by these safety rules:

I need to keep my result accurate whilst doing the experiment and by rounding it to the nearest measurement makes it easier to take measurements. The measurements are:

The results on this table show us that the longer the length of wire the higher the resistance. There is also scientific evidence to back this statement. A long wire will have more resistance than short length wire of the same thickness as the length of a wire will always affect the resistance of the wire. This is because the longer the wire, the more metal atoms there are than a short length wire. Also, the more metal atoms there are, the more affect on the resistance there is and this is down to the obstruction of the free electrons that are attempting to pass through the wire from the negative pole to the positive pole of the battery in the electric current. These flow of the electrons decrease as they collide with the metal atoms.

A short length wire hasn’t got metal atoms to get in the way of the electrons, so the current can flow easily and the resistance isn’t very high.

Alternately, a long length wire contains many metal atoms to pass when the electrons flowing through the wire. This leads to an increase in resistance as they will collide into these metal atoms, compared to a short length wire.

Overall I feel this investigation went well. The readings I took were as accurate as possible. I measured the length of the wire to the nearest mm and the resistance was measured using a voltmeter. I also repeated the experiment 3 times for maximum effect. However repeating the experiment a further time would have given me a more reliable average.

Personally I do not think that I need to change anything if I were to redo the experiment. The only thing I would do differently is use a wider variety of wires and lengths of wires. This is to give me a greater understanding of what affects the resistance of a wire. Another thing that I would do if I had more time is alter the variable. For instance I would try to find out if the temperature affects the resistance more than the length of wire does.