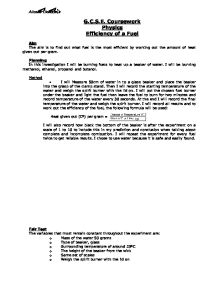 Physics - Efficiency of a Fuel.

Aliosha Likhoded G.C.S.E. Coursework Physics Efficiency of a Fuel Aim The aim is to find out what fuel is the most efficient by working out the amount of heat given out per gram. Planning In this investigation I will be burning fuels to heat up a beaker of water. I will be burning methanol, ethanol, propanol and butanol. Method * I will Measure 50cm of water in to a glass beaker and place the beaker into the grasp of the clamp stand. Then I will record the starting temperature of the water and weigh the spirit burner with the lid on. I will put the chosen fuel burner under the beaker and light the fuel then leave the fuel to burn for two minutes and record temperature of the water every 30 seconds. At the end I will record the final temperature of the water and weigh the spirit burner. I will record all results and to work out the efficiency of the fuel, the following formula will be used: Heat given out (C�) per gram = I will also record how black the bottom of the beaker is after the experiment on a scale of 1 to 10 to include this in my prediction and conclusion when talking about complete and incomplete combustion. ...read more.

However, one of the Butanol trails resulted in an odd result which is circled in my results table. Over two minutes of heating in the first trial the temperature of Butanol rose by 16 C� whereas in the second trial the temperature rose by 37 C� but the temperature increase per gram stayed roughly the same. I think this is because we used different fuel burners and they had different size wicks that affected it. The temperature increase per gram was a bit different because some of the heat was lost to the surroundings into the air and it was more significant 2nd time when there was less fuel used and so less temperature rise. If I was to do it again I would repeat the experiment more times to get even more reliable results and burn fuels for a bit longer. Improving insulation techniques would be a valuable asset in obtaining the most reliable data I could. Another error is that of incomplete combustion. To overcome this problem, I would have to make sure a sufficient supply of oxygen was involved in the reaction. I feel that this experiment could have been improved by comparing other hydrocarbons to the alcohol group such the alkane and alkene families. I could also work out the energy given out per mole using bond energies and compare this to my results. ...read more.