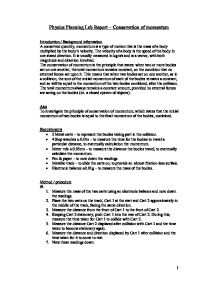 A conserved quantity, momentum is a type of motion that is the mass of a body multiplied by the body’s velocity. The velocity of a body is the speed of the body in one stated direction. It is usually measured in kgm/s and is a vector, with both magnitude and direction involved.

The conservation of momentum is the principle that states: when two or more bodies act on one another, the total momentum remains constant, on the condition that no external forces act upon it. This means that when two bodies act on one another, as in a collision, the sum of the initial momentum of each of the bodies remains a constant, and so will be equal to the momentum of the two bodies combined, after the collision. The total momentum always remains a constant amount, provided no external forces are acting on the bodies (i.e. a closed system of objects).

To investigate the principle of conservation of momentum, which states that the initial momentum of two bodies is equal to the final momentum of the bodies, combined.

Data table #3 showing the momentum before & after the collision.

Also, friction was not and could not be completely avoided. Due to friction the velocity of the carts would have been decreased and effected. Even though a near frictionless track was utilized, friction cannot be avoided, for if friction was negligible the cart could not be able to move. This could have clearly altered and effected the final results. The meter rule used to measure the distance traveled by the carts had a systematic error of ±0.05cm. Therefore values could not be measured more accurate than that. Like wise the stopwatch has a systematic error of ±0.01s. To be more accurate, more precise pieces of equipment can be used.A critical error in the experiment was not taking enough results. To extend my enquiry, I could have obtained more results.

From analyzing the data and comprehending particular lapse in the method I have been able to pin–point my errors and shall strive to avoid them next time.