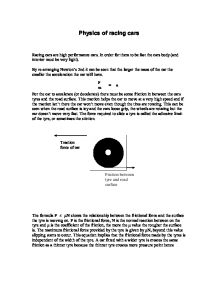 Racing cars are high performance cars. In order for them to be fast the cars body (and interior must be very light).

By re-arranging Newton’s 2nd it can be seen that the larger the mass of the car the smaller the acceleration the car will have.

For the car to accelerate (or decelerate) there must be some friction in between the cars tyres and the road surface. This traction helps the car to move at a very high speed and if the traction isn’t there the car won’t move even though the tires are rotating. This can be seen when the road surface is icy and the cars loose grip, the wheels are rotating but the car doesn’t move very fast. The force required to slide a tyre is called the adhesive limit of the tyre, or sometimes the stiction.

Newton’s second law (F=ma), shows that when the traction force is generated the car accelerates forward. Newton’s third law, every action has an opposite and equal reaction shows that when the car does accelerate the driver experiences a force opposite and is pushed backwards into the seat. When the steering wheel is turned the driver tries to get the front tyres to push a little sideways on the ground, and by Newton’s third law the ground pushes back, which causes little sideways acceleration. This changes the sideway velocity. The acceleration is relative to the sideways force and inversely relative to the mass of the car. The sideways acceleration causes the car to go sideways which the driver requires when turning the wheel. When the car decelerates the resistive braking force acts in the opposite direction to the moving car and the driver is pushed forward. The car experiences torque when traction and braking forces are generated. This transfers the weight forward when accelerating sharply and backward when braking sharply. Weight transfer can be controlled by using throttle, brakes and steering.

The equation shows that if the speed of the car doubles, the centripetal force must quadruple for the car to go around the same bend, the centrifugal force must also quadruple if this happens. Therefore, racing cars are subject to forward and backward forces due to linear acceleration and deceleration and also large side forces during cornering bends at high speeds, which are called G forces. The equation also shows that if the bend is doubled the centripetal halves. It’s useful for the driver to go around bends at high speeds as the fastest route given by tracing out a curve with the largest radius possible.

Air resistance can be modelled by the equation

If the speed of the vehicle doubles the drag force quadruples. The drag force can be minimised by decreasing the reference area. This is achieved by making the car flatter so that it cuts through the wind easily giving it a stream lined shape. The shape is also usually like the wings of an aeroplane upside down. In aeroplane the wings will give it a lift whereas the upside down shape on the car will give it a downwards force which helps it prevent from lifting up at high speeds.

According to Newton’s first law of motion a car in a straight line motion at a constant speed will keep such motion until it’s acted upon with an external force. The reason why the car does not perform such a motion forever is because of air resistance and friction.