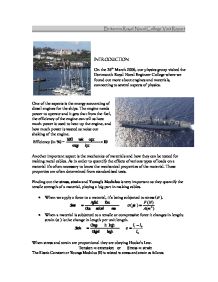 Physics Report on a Visit to the Royal Naval Engineer College

Britannia Royal Naval College Visit Report Introduction On the 28th March 2006, our physics group visited the Dartmouth Royal Naval Engineer College where we found out more about engines and materials, connecting to several aspects of physics. One of the aspects is the energy accounting of diesel engines for the ships. The engine needs power to operate and it gets that from the fuel, the efficiency of the engine can tell us how much power is used to heat up the engine, and how much power is wasted as noise our shaking of the engine. Efficiency (in %) = Another important aspect is the mechanics of materials and how they can be tested for making metal cables. As in order to quantify the effects of various types of loads on a material it's often necessary to know the mechanical properties of the material. These properties are often determined from standardised tests. Finding out the stress, strain and Young's Modulus is very important as they quantify the tensile strength of a material, playing a big part in making cables. * When we apply a force to a material, it's being subjected to stress (). * When a material is subjected to a tensile or compressive force it changes in length; strain () is the change in length per unit length. When stress and strain are proportional they are obeying Hooke's Law. ...read more.

to find out how power, measured in Watt W or Joule per second Js-1 is used and wasted in a ship engine. To find out how an engine uses and loses power, and the efficiency of the engine, we performed some tests on a small diesel engine which is fitted with measuring instruments. 1. Fuel power- how much power the engine gets from burning the fuel To find out MFR (mass flow rate) or the mass of fuel burnt per sec, a measuring cylinder and a timer is attached to the engine. * Timer gives the time, which was 260s, engine speed and number of revolutions of the engine for the period during which a set amount of fuel is used by the engine. * The cylinder measures the volume of fuel used, which was100ml, or 0.0001m3 MFR (kg s-1) = Volume (ml) � density (kgm-3) � time (s) So to find the fuel power, we multiply the MFR by the calorific value (known) Power from the fuel = mass of fuel per sec � heat per kg of fuel (calorific value) Pfuel = kg s-1 � J kg-1 0.0001m3 � 835 kgm-3 � 260s � 4.526*107 J kg-1 = 14535 Js-1 2. Brake power- how much power that comes out of the engine to do work It's measured using a dynamometer, which is an electrical generator. ...read more.

can be maximised, and the emissions can be minimised by controlling the timing of the start of injection of fuel into the cylinder. Also the addition of a turbocharger or supercharger to the engine would greatly assists in increasing the efficiency and power output.The increased fuel economy of the diesel over the petrol engine would mean that the diesel produces less carbon dioxide (CO2) per unit distance. It is hoped that as hybrid electric cars are becoming more common, the Navy will be able to bring hybrid electric ships to the high seas. The Office of Naval Research (ONR) is developing innovative propulsion systems based on new fuel-cell technology for efficient generation of electrical power and greater design flexibility for future ships. Unlike gas turbines and diesel engines, fuel cells do not require combustion, and therefore do not produce pollutants such as nitrogen oxide. Fuel cells are also far more efficient than combustion engines. The fuel cell system that is developing will be capable of between 37-52%efficiency. Moreover, fuel cells can be dispersed throughout the ship instead of being co-located with the ship's shaft. This added flexibility will improve ship survivability. Reforming diesel is especially tricky due to the sulfur present in the fuel. The integrated fuel processor heats and vaporizes the diesel, and then the sulfur in it is converted into hydrogen sulfide. The hydrogen sulfide is then exposed to zinc oxide, oxidizing the sulfur into sulfur dioxide and separating it from the hydrogen. Fuel cells combine improved efficiency, low emissions and design flexibility, all of which help slash shipbuilding costs. ...read more.