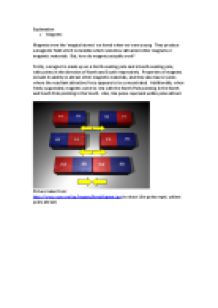 Magnets were the ‘magical stones’ we loved when we were young.  They produce a magnetic field which is invisible which somehow attracted other magnets or magnetic materials.  But, how do magnets actually work?

Firstly, a magnet is made up on a North-seeking pole and a South-seeking pole, with points in the direction of North and South respectively.  Properties of magnets include its ability to attract other magnetic materials, and they also have 2 poles where the resultant attractive force appears to be concentrated.  Additionally, when freely suspended, magnets come to rest with the North Pole pointing in the North and South Pole pointing in the South.  Also, like poles repel and unlike poles attract.

As with all mechanical toys, and also as it is handmade, there are certain flaws and errors in our construction of the toy.  Improperly fitted parts or loose parts can affect the efficiency of our catapult and one of the biggest areas of energy loss in a catapult is the pivot points, which we tied the chopsticks together with pieces of string.