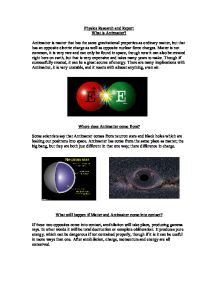 Antimatter is matter that has the same gravitational properties as ordinary matter, but that has an opposite electric charge as well as opposite nuclear force charges. Matter is not common, it is very rare and can only be found in space, though now it can also be created right here on earth, but that is very expensive and takes many years to make. Though if successfully created, it can be a great source of energy. There are many implications with Antimatter, it is very unstable, and it reacts with almost anything, even air.

Where does Antimatter come from?

Some scientists say that Antimatter comes from neutron stars and black holes which are leaking out positrons into space. Antimatter has come from the same place as matter; the big bang, but they are both just different in that one way; there difference in charge. 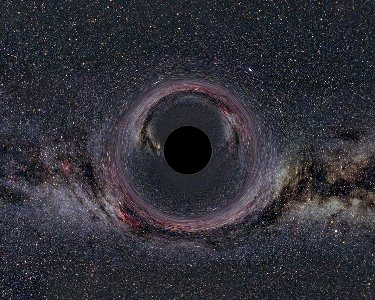 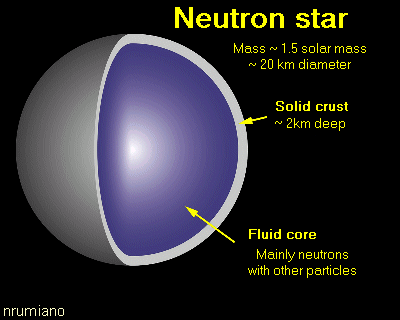 What will happen if Matter and Antimatter come into contact?

If these two opposites come into contact, annihilation will take place, producing gamma rays. In other words it will be total destruction or complete obliteration. It produces pure energy, which can be dangerous if not contained properly, though if it is it can be useful in more ways than one. After annihilation, charge, momentum and energy are all conserved.

Why is there more Matter than Antimatter?

There is a substantial amount more Matter in the universe than there is Antimatter. One of the reasons why this could be is:

In the first few moments of the universe, the Antimatter might have decayed differently than their regular Matter counterparts. By the time all the annihilations were complete, there still enough matter left over to give us all the stars, planets and galaxies we see today. 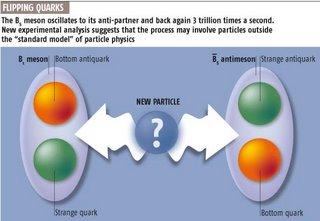 What is the Large Hadron Collider (LHC)?

The LHC is a huge tunnel, which is 17 miles long (27 km), and 3.8 meters wide, and it runs along the French – Swiss border. This is where particles bigger than electrons and positrons are collided together with as much energy as possible. Travelling nearly at the speed of light, the particles circle the tunnel 11,000 times a second. When collided, it produces gamma rays as the particles annihilate. This achieves high amounts of energy and allows probing to even smaller scales of particles, leading to research on the beginning of the universe. The LHC has four main detectors to specialise in different parts of the experiment, these are:

ATLAS – one of two so-called general purpose detectors. Atlas will be used to look for signs of new physics, including the origins of mass and extra dimensions.

CMS – the other general purpose detector will, like ATLAS, hunt for the Higgs boson and look for clues to the nature of dark matter.

ALICE – will study a "liquid" form of matter called quark-gluon plasma that existed shortly after the Big Bang.

LHCb – equal amounts of matter and anti-matter were created in the Big Bang. LHCb will try to investigate what happened to the "missing" anti-matter. 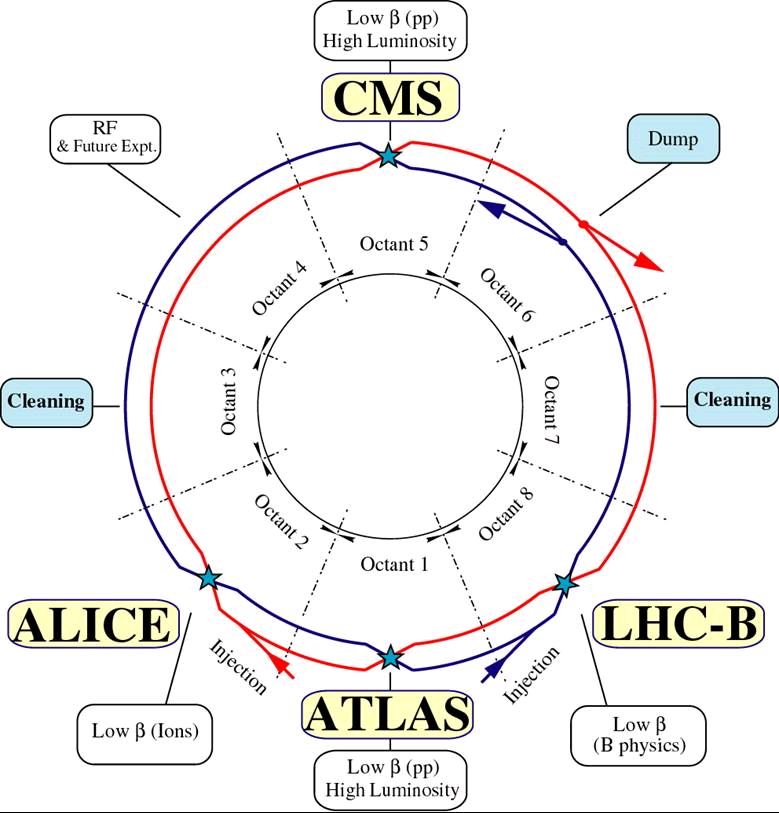 A fiction use of Antimatter is powering spaceships in deep space; this is in the science fiction program ‘Star Trek’. This can also be real tough.

The energy released when Matter and Antimatter collide can be used as an auxiliary energy source for space programs and missions.

It can also be used for medicinal purposes, such as radiography for detecting tumors in the human body.

Small amounts of Antimatter can be injected into the body, which will identify tumors or cancers, which can then be destroyed.

It can also be used to test brain activity, but this is very risky as large amounts of Antimatter can be very hazardous. 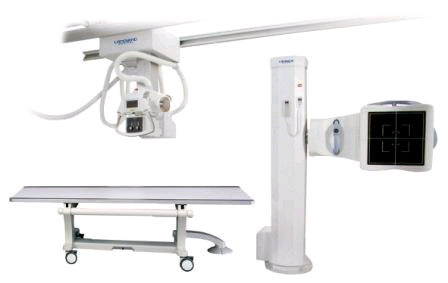 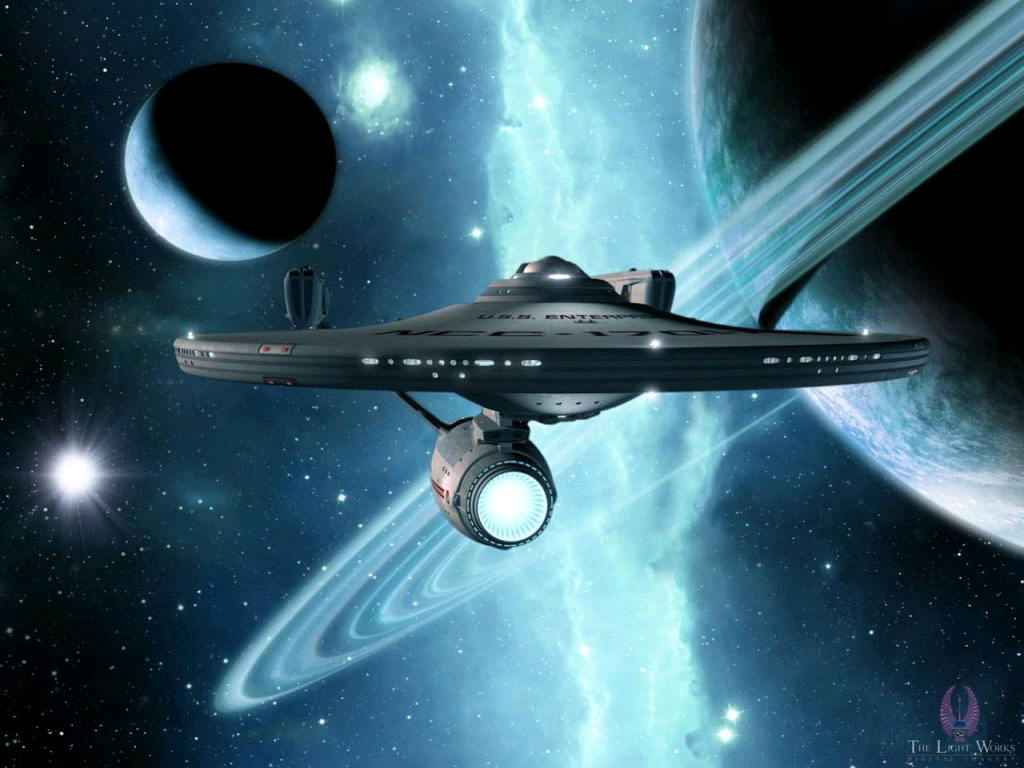 Antimatter, if created on a large scale, could become the most efficient source of energy in the world. One drop of it, can power a car for around a hundred years, and it doesn’t harm the environment because it doesn’t produce any greenhouse gases. There are massive expenses involved though; to create a couple of milligrams of Antimatter will cost a few hundred million dollars. Plus, the amount of energy needed to create it is more than the energy that it will produce itself. Also if the Antimatter is not handled correctly there could be devastation, causing millions of pounds worth of damage. 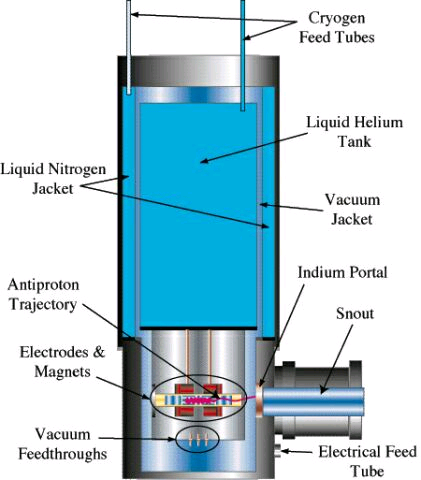 No wastage of material

Energy needed to create is more than output energy

Can be very dangerous if mishandled

Antimatter can be very useful in our everyday lives if used. It can provide endless energy, a nearly unlimited supply to satisfy the demand of millions. It may make life easier to run products and machines, and also not affect global warming. It could be the energy source that saves our planet, or it could be the one that destroys the planet.

The sources which I used for this research, such as the internet, texts books, and also magazines were very helpful. They all provided a lot of good information. Though the magazine provided more of a case study of real life than actual information or facts, but it was still as helpful. All of the resources were very reliable, as they had similar information, and also accurate.

The candidate gives a very thorough response, their report covers many different sections including; current research relating to antimatter, the uses of antimatter and how antimatter would have to be stored in order to be considered safe. The candidate has ...

The candidate gives a very thorough response, their report covers many different sections including; current research relating to antimatter, the uses of antimatter and how antimatter would have to be stored in order to be considered safe. The candidate has spilt their report into sections, which is fine, as the sub-headings help to show what is going to be discussed. However if your going to write a report this way, it can helpful to provide a contents page, as this can help you keep on track and it immediately shows the reader exactly what you plan to discuss. That said, it is also important that you write a clear introduction, which the candidate fails to do. An introduction sets the tone for your work, you should state what you plan to cover in your report/essay and you should briefly introduce your topic, in this case you should give a brief description of antimatter. You should then consider ways to catch the readers attention as this gets the reader interested in what you have to say, this means that they are more likely to read all of your work. You can do this by asking an intriguing question or stating an interesting fact or quote, though this must be relevant to your topic.

It is clear from the information that the candidate has included in this report, that they have taken the time to thoroughly research this topic, which is important as it allows you to get your facts straight and it shows dedication and enthusiasm for your subject, which is always a good thing. In addition to this the extra information you are able to include in you work can make your report/essay more enjoyable to read. Furthermore the candidate has included a bibliography, providing links to all of the sources they have used, this shows the steps you have taken to prepare for your report/essay and can show that your work is not plagiarised. That said, if you use a book as part of your research you must state the authors name and not just the title of the book, as the candidate has done. On another note, the candidate has used their conclusion to evaluate the use of the resources they have used, though this is an important thing to consider, it is not the appropriate way to conclude your work. A good conclusion, provides a summary of your points with reference to why these are important, and if the title of your work includes a question, like this report, you must make sure this is thoroughly answered in your conclusion. In addition to this, it is often a good idea to provide a personal response to your topic, this could include what you have learnt or even a predication on how the information you have researched could be useful in the future.

This report is reasonably well written, though the candidate has used bullet points near the end, which I do not recommend, you should try to write in continual prose throughout your work. However, the candidate does demonstrates a good understanding of this topic and they have accurately used appropriate technical terms. There are a few spelling errors but punctuation and grammar are fine.