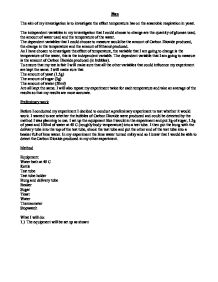 Plan for Anaerobic Respiration in Yeast

5.) The stopwatch will be started and the number of bubbles in the beaker counted over 10 minutes. 6.) After 10 minutes the stopwatch will be stopped and reset and the number of bubbles recorded in the results table on page . 7.) The test tube will be emptied, washed and dried. 8.) Steps 1-7 will be repeated twice for water at 20 C, the results being recorded each time. 9.) An average of the three results will be calculated and recorded in the results table. 10.) Steps 1-9 will be repeated for the water at 30 C 11.) Steps 1-9 will be repeated for 40 C water temperature, but in Step 1 the water will not need to be allowed to cool. 12.) For temperatures 50 C and 70 C the kettle will be used to eat the water and then it will be allowed to cool until it has reached the desired temperature. Once the desired temperature has been reached 50ml of the water will be measured out, and Steps 2-9 will be followed for each temperature. ...read more.

For the enzyme zymase, it becomes denatured at around 55 C. This diagram is the representation of a denatured enzyme. As you can see the blue substrate no longer fits the red active site of the enzyme and so no reaction can take place and the enzyme is useless. I predict that the amount of Carbon Dioxide released by the yeast will rise or stay quite high as the temperature rises up to approximately 50 C. After this I think that the amount released will begin to drop as more and more of the zymase enzymes become denatured and useless and the respiration reaction cannot take place. I think that the amount released will rise before that because as the temperature increases, so will the kinetic energy of the substrate and therefore so will the probability of a substrate moving into the active site of the enzyme. I think the optimum temperature will be a little before the enzymes become denatured as there is most kinetic energy at this point. I think perhaps around 37 C as this is body temperature as most enzymes work at their best at this temperature because they are designed to work in the body. ...read more.

This piece of coursework provides a comprehensive plan, utilising diagrams well to explain why temperature will affect enzymes. Although this is only a plan, an empty results table would improve this piece by showing clearly how the hypothesis will be ...

This piece of coursework provides a comprehensive plan, utilising diagrams well to explain why temperature will affect enzymes. Although this is only a plan, an empty results table would improve this piece by showing clearly how the hypothesis will be tested. The experiment is well described and instructions are clear. My only query is that safety is not addressed: when dealing with hot water, it could be advised to wear safety goggles or be cautious of spillages. Acknowledging this will only strengthen a piece of coursework at GCSE level.

The level of analysis is strong in this piece. They ably identify the variables which affect the experiment, offering a solution to keep them controlled. In my experience, it would be useful to expand on why these variables will alter the results - this can simply be done by mentioning that the concentration of enzymes will increase the number of collisions, and thus the rate of reaction increases. It was nice to see a discussion of enzyme collision theory - it is vital to discuss what happens at extreme temperatures, and this piece has done so by mentioning denaturing. I find when talking about denaturing it is wise to say that this is irreversible, and the reaction will no longer occur at lower temperatures due to the active site being changed.

This piece is constructed superbly. There isn't any irrelevant information, and the thought process flows well throughout the piece. Technical terms are used when necessary. My only query is that they use the phrase "I think" or "perhaps" quite often - if they have backed their thoughts with evidence (as they have in most cases) their language can be a bit more assertive.