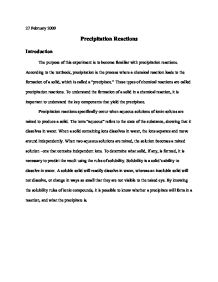 Precipitation. The purpose of this experiment is to become familiar with precipitation reactions. According to the textbook, precipitation is the process where a chemical reaction leads to the formation of a solid, which is called a precipitate.

27 February 2009 Precipitation Reactions Introduction The purpose of this experiment is to become familiar with precipitation reactions. According to the textbook, precipitation is the process where a chemical reaction leads to the formation of a solid, which is called a "precipitate." These types of chemical reactions are called precipitation reactions. To understand the formation of a solid in a chemical reaction, it is important to understand the key components that yield the precipitate. Precipitation reactions specifically occur when aqueous solutions of ionic solutes are mixed to produce a solid. The term "aqueous" refers to the state of the substance, showing that it dissolves in water. When a solid containing ions dissolves in water, the ions separate and move around independently. When two aqueous solutions are mixed, the solution becomes a mixed solution -one that contains independent ions. To determine what solid, if any, is formed, it is necessary to predict the result using the rules of solubility. Solubility is a solid's ability to dissolve in water. A soluble solid will readily dissolve in water, whereas an insoluble solid will not dissolve, or change in ways so small that they are not visible to the naked eye. By knowing the solubility rules of ionic compounds, it is possible to know whether a precipitate will form in a reaction, and what the precipitate is. Methods and Materials This experiment required the mixture of several different substances, followed by observation of the results. ...read more.

Questions The solubility rules used to predict the identity of the precipitates formed in the reactions of this experiment are general "rules of thumb" that hold true in most instances. However, the specific quantity of an ionic solid that will dissolve in a given quantity of solvent is governed by the solubility or the solubility product of the ionic substance. Use your textbook or encyclopedia for each of these terms. Solubility - solubility is physical property of a substance having the ability to dissolve in water. Solubility product - solubility product constants are used to describe saturated solutions of ionic compounds of relatively low solubility. A saturated solution is in a state of dynamic equilibrium between the dissolved, dissociated, ionic compound and the undissolved solid. Source: www.chem.purdue.edu/ Conclusion Though chemistry is a very complex science, experimenting with chemical reactions offers a chance to experience and understand the consistent workings of the study. On paper, it seems as though the hundreds of elements and thousands of compound combinations are an endless wall of difficult formulas. Through experiences like these experiments, however, I can firsthand witness the consistency in chemical change, and see exactly how the world functions. Precipitation opened up a new aspect of chemistry -the ability to see and know how ions react in water, and how they react with each other to form new solids. Seeing and understanding why chemical changes happen transforms an endless wall of "dry" formulas into a fascinating world of actual substances found in reality. ...read more.