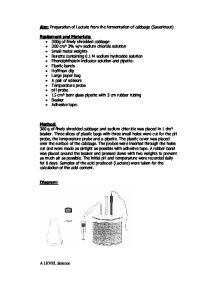 Preparation of Lactate from the fermentation of cabbage (Sauerkraut).

Aim: Preparation of Lactate from the fermentation of cabbage (Sauerkraut) Equipment and Materials: * 300g of finely shredded cabbage * 300 cm� 3% w/v sodium chloride solution * Small metal weights * Burette containing 0.1 M sodium hydroxide solution * Phenolphthalein indicator solution and pipette. * Elastic bands * Hoffman clip * Large paper bag * A pair of scissors * Temperature probe * pH probe * 15 cm� bent glass pipette with 3 cm rubber tubing * Beaker * Adhesive tape. Method: 300 g of finely shredded cabbage and sodium chloride was placed in 1 dm� beaker. Three slices of plastic bags with three small holes were cut for the pH probe, the temperature probe and a pipette. The plastic cover was placed over the surface of the cabbage. The probes were inserted through the holes cut and were made as airtight as possible with adhesive tape. A rubber band was placed around the beaker and pressed down with two weights to prevent as much air as possible. The initial pH and temperature were recorded daily for 6 days. Samples of the acid produced (Lactate) were taken for the calculation of the acid content. Diagram: Results and Calculations: Sampling of acid content - 5cm� of the acid was removed using a pipette and was added to distilled water in a beaker. This mixture was titrated against 0.1 M of sodium hydroxide using 2 drops phenolphthalein as the indicator since we are titrating a strong base against a weak acid. ...read more.

for six days and we did not know exactly the appropriate temperature for the reaction conditions until the end of the fermentation process when we got the results from the computer with the use of the probe. There might not have been sufficient cabbage to ferment to get enough products or the cabbage used may have not have had enough nutrients or may have been decayed and not have been fresh. All these could have been due to abnormalities of the cabbage and would obviously have led to a lower yield since the sugar content (glucose) was not sufficient to obtain a completely fermented product since the bacteria Lactobacillus Plantarum requires a source of nutrients for metabolism because the energy requirements of micro-organisms are very high. In the handout we used for the fermentation process, we were asked to remove the product (lactate) aseptically. I read up the meaning and found out that it meant the fermenter should have no contamination whatsoever i.e the air around the bioreactor must be sterilised and the equipment should also be cleaned with hot water before use and also the culture medium should be sterilised in the fermenter by passing steam through it. I noticed that we did not carry out any of these suggestions above and this may also have led to the low yield since the process was probably contaminated and might have resulted in other compounds being produced. ...read more.

Glucose pyruvate lactic acid + CO2 + 2 ATP * I would also ensure that I do more than enough repeat readings when titrating so that I can be sure that the average result is really accurate since taking averages reduces random errors incurred during the experiment. In future, instead of using the apparatus we used which consisted of a beaker, elastic bands, large plastic bag to cover etc, I would use the apparatus which consists of a conical flask with a rubber bung as the cover with holes in it so that the probes could be inserted in them because after the experiment it was noticed that the product was smelling. This is because the micro-organism involved in the fermentation find oxygen toxic and do not grow well in its presence. Also, oxygen is prevented because the growth of the spoilage bacteria which will make the product smell is favoured by oxygen. This method is better because less air gets into it unlike the other method we used which enabled oxygen to enter it as the plastic bag was not very effective in its supposed function and made the product smell. In the new method, oxygen would be excluded as much as possible to ensure that anaerobic conditions predominate. If the fermentation becomes too aerobic (i.e with oxygen), a strong offensive odour will be noticed and this will reduce the yield of Lactate. A LEVEL Science ...read more.