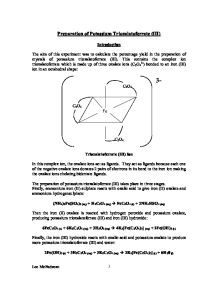 The liquid was decanted off and 50cm3 of hot deionised water was added to the precipitate. The mixture was stirred. After the precipitate had settled, the liquid was once again decanted off. 10cm3 of potassium oxalate solution was added to the washed precipitate and the mixture was heated to about 40oC. 20cm3 of "20 volume" hydrogen peroxide solution was added slowly with continuous stirring to the mixture. The temperature was kept close to 40oC during the addition of the hydrogen peroxide. This changed the colour from orange to dark red / brown. The mixture was heated nearly to boiling and oxalic acid solution was added, dropwise with stirring, until the brown precipitate of iron (III) hydroxide dissolved. The solution changed in colour from dark red / brown to clear lime green. The reaction mixture was kept near to boiling during the addition of the oxalic acid. The hot solution was filtered through a fluted filter paper into a crystallising basin. ...read more.

This results in possible errors in the balance and measuring cylinder, meaning the mass of hydrated ammonium iron (II) sulphate and the volume of oxalic acid, potassium oxalate, hydrogen peroxide, deionised water and ethanol could all be slightly wrong. If less of each compound was put in, the mass of potassium trioxalatoferrate (III) would not be as much as anticipated. There are more factors that result in the yield being less than 100%, including systematic errors. These include flaws in the equipment, flaws in the procedure (such as when the solution is transferred from the beaker to the crystallising basin some solution remains in the beaker) and lack of purity in reagents if they are not as concentrated as stated because some of it has reacted with air over a long period of time. Human error is also a major contributor to the yield not being 100%. In the preparation of potassium trioxalatoferrate, the hydrogen peroxide acts as the oxidising agent. ?? ?? ?? ?? 1 Lee McFadzean ...read more.