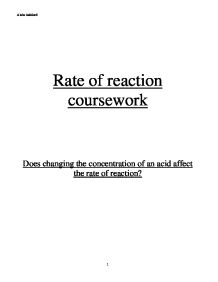 The CO2 emitted by 5g is too rapid for us to gain any serviceable records, passing 100ml/cm� after just 30 seconds. There was the same problem with 3g, if maybe not as unusable as 5g. With 1g there was notable distance from the 100ml/cm� after 100 seconds that it was straightforward to go with 2g which is in between both values that were of the two extremes. I have also decided to take down results until either it the volume passes the 100ml/cm� mark or once 5 minutes has passed (300 seconds). For the purposes of rate equations and orders of reaction, the rate of a reaction is measured in terms of how fast the concentration of one of the reactants is falling. Its units are mol dm-3 s-1. However, for object of this experiment, it will has little or no relevance as we are not measuring the difference in concentration before and after the reaction but instead basing it on the measurements of one of the products produced, in this case its CO2. Method: (Note: all measurements of volumes were taken at eye level) 1. Firstly I will collect all of my equipment and set it up, like in the diagram. 2. I will measure the mass of my marble chips to 2g, and measure the volume of Hydrochloric Acid to 25cm? of the correct concentration. 3.I will then add my marble chips to the Hydrochloric Acid in the conical flask; then quickly start the stop clock and put the bung in the conical flask, without letting any Carbon Dioxide escape. 4. I will take down the volume of Carbon Dioxide every 10 seconds and record it in my table. 5. I will find the rate of reaction by choosing two points on my line or tangent then applying this formula: Change in x axis Change in y axis 6. I will repeat steps 1-5 three times for each concentration: 0.5, 1.0, 1.5, 2.0, 2.5 and 3.0 mol ( the results of the ...read more.

Using a water bath would ensure a constant temperature. Therefore we will not have to worry about keeping it controlled and this would make collecting the results easier. However, it could also be because that all of the marble chips differ in size during those experiments, there was a lot of change in them. The improvements to help reduce errors and to improve accuracy, the experiment could have been repeated multiple times at same temperatures and/or repeated at different temperatures. Also, the experiment could have been conducted using a different concentration to determine if a change in temperature has the same effect on reaction rate. The volumes and temperatures of the solution could have been measured using more accurate equipment, with a smaller scale which will be easier to record. In terms of expanding on what we've already done, we could have taken the investigation further by changing the volume of hydrochloric acid to see what affect that has on the rate of reaction. We could have also changed the mass of calcium carbonate used to see whether changing the amount of reactant changes the rate of reaction. The systematic errors in this experiment were: � Incorrect calibrated electronic balance, thermometer, gas syringe and stopwatch which can cause the recordings that are different to the right value. � The impure or contaminated HCl and CaCO3 could have been present which are different to the supposed value. The random errors in the experiment were: � The inconsistency or recording certain temperatures and weights at certain time intervals with the stopwatch � Inability to predict if all the CaCO3 is added to the conical flask � Inability to predict when to start the timing of the reaction � Parallax error of reading the thermometer and gas syringe at eye level � Escaping gases while placing the CaCO3 in the reaction starts before adding the bung � The inability to maintain the reacting solutions at constant temperature. Even the smallest change in the temperature will have a major effect to the reaction rate. ...read more.