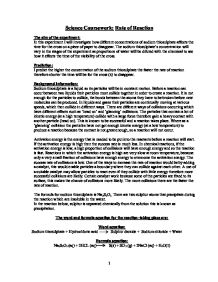 Rate of reaction of different concentrations of sodium thiosulphate.

Science Coursework: Rate of Reaction The aim of the experiment: In this experiment I will investigate how different concentrations of sodium thiosulphate affects the time for the cross on a piece of paper to disappear. The sodium thiosulphate's concentration will vary in the stages of the experiment as proportions of water will be diluted with the chemical to see how it effects the time of the visibility of the cross. Prediction: I predict the higher the concentration of the sodium thiosulphate the faster the rate of reaction therefore shorter the time will be for the cross (x) to disappear. Background Information: Sodium thiosulphate is a liquid so its particles will be in constant motion. Before a reaction can occur between two liquids their particles must collide together in order to create a reaction. It is not enough for the particles to collide, the bonds between the atoms they have to be broken before new molecules can be produced. In liquids and gases their particles are continually moving at various speeds, which then collide in different ways. There are different ways of collisions occurring which have different effects such as 'head on' and 'glancing' collisions. The particles that contain a lot of kinetic energy (at a high temperature) collide with a large force therefore gain a heavy contact with another particle (head on). This is known to be successful and a reaction takes place. Where as a 'glancing' collision the particles have not got enough kinetic energy (at a low temperature) to produce a reaction because the contact is not great enough, so a reaction will not occur. Activation energy is the energy that is needed to be put into the reactants before a reaction will start. If the activation energy is high then the success rate is much less. In chemical reactions, if the activation energy is low, a high proportion of collisions will have enough energy and so the reaction is fast. ...read more.

Immediately after all of the acid is poured in start the stopwatch. Step 6- One person in the group has to be responsible for the visibility of the cross as the judgment must be unique. Keep a constant watch over the solution to check when the cross is completely covered by the precipitated sulphur. Step 7- As soon as the cross (x) disappears stop the stopwatch and record the reading to two decimal place for more accuracy. Step 8- Drain out the beaker containing precipitated sulphur and rinse the flask with water then wipe with a clean dry cloth. Step 9- Re-do each concentration three times in this exact method. This will increase reliability and the three outcomes for each concentration can be found a mean time. Table showing the results of my experiment. Analysis of my table showing the results of my experiment: This is the table that shows the results I got from my experiment. I decided to choose three trials for each concentration of sodium thiosulphate so the results I receive are more reliable thus giving me a mean time (seconds). The mean time for each of the concentration will help me to plot a graph. The preliminary experiment had only 2 concentrations the strongest (40g/dm3) molarity and the weakest (8g/dm3) molarity but I decided to include 5 different concentrations of sodium thiosulphate so I can see the difference in time for the cross to disappear and also for a better trend. During the process of my experiment I had realised the weaker the solution the slower the rate of reaction so the time increased. In my initial prediction I knew this would happen because of the collision theory. The collision theory can explain these results because the higher the concentration the faster the rate of reaction. My results show between the concentration of 40g/dm3 and 16 g/dm3 the three trials are very close to each other but the concentration 8g/dm3 the three trials aren't as close. ...read more.