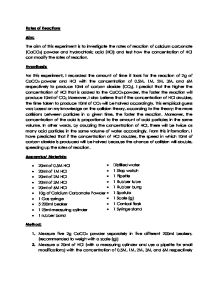 In other words, the lower the concentration of the acids are, the slower and less efficient the reaction would be because there are less acid particles reducing the chances of collision. One pattern I have observed while performing the experiment is that the rates of reaction increases most dramatically when the concentration of HCl is doubled from 1M to 2M, 12.82ml/min to 333.33ml/min. The reason the other ratio of the other results did not differ as much may be because of the amount of reactant, 2g of Calcium Carbonate Powder. Moreover, because of the little area of the reactants, there may only be limited amounts of acid particles from the reactants reacting with HCl at once. The increase from 0.5M to 1M was not as significant because an increase 0.5M is not enough to increase the collisions excessively because 1M of HCl is relatively spread out in the 20ml of HCl. Therefore, trying to react with such a small reactant is still relatively difficult because the acid particles are still too far apart. However, when the increase of concentration of HCl reaches 2M, the results was most pervasive because the increase of 1M in a 20ml HCl allows the collision to be more frequent as 2M of HCl in the volume of 20ml proves to be relatively close together to be able to react with a small reactant. However, when the concentration of HCl reaches 3M and 6M, they did not show as significant an increase because there can only be limited amounts of acid particles reacting with a reactant at once. ...read more.

If I were to do the experiment again, I would measure the temperatures of each test tube before I begin the reaction to minimize temperature differences. Also, I would spread out the powder each time before I pour in the acid to ensure the difference in surface area to be minimized Lastly, when I reached the experiments that involved HCl of the concentrations of 3M, and 6M the time taken for the reaction to produce 10ml was recorded to be under a second. The results that were under a second could be more challenging to time because I would have to observe the syringe while timing all in a second time. Moreover, my reaction time can contribute to the less precise results because it will differ more in a fast reaction like 3M, and 6M than a slow one like 0.5M because I would be expecting and ready to stop the stop watch as the syringe approaches 10ml of CO2. To reduce this error, I can have a partner who either watches the syringe or does the timing for me. However, if my partner does one timing for me, it means that my partner will have to do the timing for every concentrations of HCl because my partner's reaction time will differ to mine. Another alternative would be that I record the results of the time taken to produce 20ml or more of CO2 because by doing this, it will give me more time to prepare for the timing myself as it will take longer to produce 20ml of CO2 than to produce 10ml. ?? ?? ?? ?? ...read more.

This is a generally good report. The limiting factor is the quality of the data collected. The appropriate number of concentrations are used. However it lacks repeats. Specific strengths and improvements have been suggested throughout.