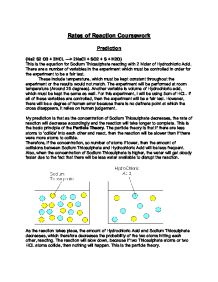 The cross was observed through the solution and the time when the cross disappeared from view was noted in a results table. The beaker was then emptied, washed out with tap, then distilled water, and then the base was dried if needed. The above procedure was then repeated, but with varying amounts of sodium thiosulphate and distilled water. The solution of thiosulphate and water remained at 50cm . The solution was again placed in the conical beaker, the acid was added and the clock started. The time taken for the cross to disappear was again noted. The experiment was repeated to obtain additional results. Each ratio of sodium thiosulphate to water was carried out twice, and the results averaged to get a more accurate result. The total solution of the thiosulphate, hydrochloric acid and water always equalled 55cm . Obtaining Evidence ...read more.