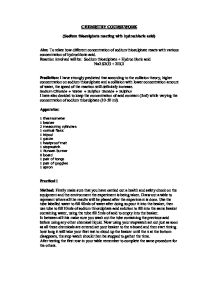 The water is heated to the necessary temperature (30�C to 70�C) then the two measuring cylinders are taken out and the contents of both are poured into a conical cylinder. The time it takes for the X to disappear is timed and recorded. The experiment is repeated using all the temperatures. The entire procedure is then repeated. Repeated results and averages will be taken to improve the credibility of the findings, and present solid grounding for the final conclusion. Fair test: In order to prevent this experiment from turning into an unfair test a few things will have to be taken into consideration .First (filtration) making sure that when measuring both the water and acids (thiosulphate) they were the only liquid substances in the tube also the reading being taken by more than one persons would also be reliable as it will help with the recording of results. An assistant will also be appropriate during the prompt starting of the stopwatch. Results: Experiment 1 Thiosulphate solution Water Acid Dilute Time(secs) 10 40 5 0.18 391 20 30 5 0.36 345 30 20 5 0.54 270 40 10 5 0.72 141 50 5 0.90 81 Experiment 2 Temp(�C) ...read more.

During the second experiment I realised that the effect of heat (temperature) within the practical was that the higher the temperature within the water it resulted in the sodium thiosulphate clouding up quicker, I measured this in seconds to reassure myself between the difference and the comparisons of both experiments. The collision theory appeared to take place in both my experiments and it also matched with my prediction before these experiments were taken out. Now that I have completed the experiments testing how sodium thiosulphate reacts with both different volumes of (acid & water) and with various temperatures of water ranging from 20-70 degrees Celsius, I have com with the conclusion that sodium thiosulphate reacts most properly when there are less other solution for it to collide with when reacting and that also the varying of different temperatures of water helps speed up the reaction. Evaluation: Having completed the experiment I am generally pleased with my results as I can genuinely say that they matched my prediction and that they are near perfect. But throughout the experiment I realise that it could be improved by having an assistant which would have made things not just smoother but it would have helped with conducted a fairer test. ...read more.