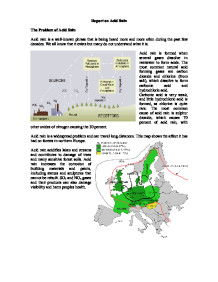 Report on Acid Rain - The Problem and Solution

Report on Acid Rain The Problem of Acid Rain Acid rain is a well-known phrase that is being heard more and more often during the past few decades. We all know that it exists but many do not understand what it is. Acid rain is formed when several gases dissolve in rainwater to form acids. The most common natural acid forming gases are carbon dioxide and chlorine (from salt), which dissolve to form carbonic acid and hydrochloric acid. Carbonic acid is very weak, and little hydrochloric acid is formed, as chlorine is quite rare. ...read more.

Acid rain increases the corrosion of building materials and paints, including statues and sculptures that cannot be rebuilt. SO2 and NOx gases and their products can also damage visibility and harm peoples health. Solutions to the Problem The best way to combat acid rain is to reduce the amount of NOx and SO2 being released into the atmosphere. Catalytic converters in cars can reduce the emissions of NOx by up to 90 percent, but although they are standard in new cars, they cause more carbon dioxide to be released, which contributes to the greenhouse effect. ...read more.

Once the fuel has been burned, the SO2 can be removed from the gases. Most methods spray a mixture of limestone and water onto the gases. This reacts with the SO2 to form gypsum, a useful building material. Another option is not to burn fossil fuels, but to use alternative energy sources. Alternative energy sources such as solar or hydroelectric power can be used to produce "clean" electricity, but are still expensive. All of these methods for reducing acid gases are costly, and have disadvantages, but laws have been passed to force businesses to use them. This may seem like a drastic step to take, but acid rain is a very big problem. ...read more.