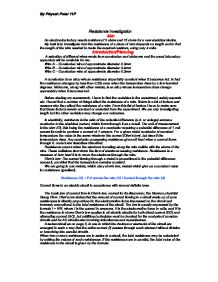 An electronics factory needs resistors of 5 ohms and 15 ohms for a new electrical device.

My task is to investigate how the resistance of a piece of wire depends on length and to find the length of the wire needed to make the required resistors, using only 4 volts.

A selection of different wires made from constantan and nichrome and the usual laboratory apparatus will be available for me.

Before starting my coursework, I have to find the variables in the experiment, safety aspects etc. I found that a number of things affect the resistance of a wire. Below is a list of factors and reasons why they affect the resistance of a wire. From this list of factors I have to make sure that these factors remain constant or excluded from the experiment. We are only investigating length but the other variables may change our outcomes.

In electricity, resistance is the ratio of the potential difference (p.d. or voltage) across a conductor to the electrical current, which flows through it as a result. The unit of measurement is the ohm (O), this being the resistance of a conductor requiring a potential difference of 1 volt across its ends to produce a current of 1 ampere. For a given metal conductor at constant temperature the value is the same whatever the current (Ohm's law)

6 results were taken with the wire, the table below shows the results, including the Voltage and the Current of each length of each wire.

We then each converted our results to find the resistance running through the wire. In doing this we used the equation V = IR, where (V) is the voltage, (I) being the current and (R) the resistance. In the case of our results, we had to use the formulae R = V divided by I.

In electricity, resistance is the property of an electric circuit or part of a circuit that transforms electric energy into heat energy in opposing electric current. Resistance involves collisions of the current-carrying charged particles with fixed particles that make up the structure of the conductors. Resistance is often considered as localised in such devices as lamps, heaters, and resistors, in which it predominates, although it is characteristic of every part of a circuit, including connecting wires and electric transmission lines.

The spread of electric energy in the form of heat, even though small, affects the amount of electromotive force, or driving voltage, required producing a given current through the circuit. In fact, the electromotive force V (measured in volts) across a circuit divided by the current I (amperes) through that circuit defines quantitatively the amount of electrical resistance R. Precisely, R = V/I.

During my experiment I have noticed several modifications I could make to improve on the Investigation if I was to repeat it, once more.

The first of these modifications would be in the circuit that I would use. To be more accurate with my results I would use the following:

To also improve on my results I would use a digital instrument to read the voltage, current and resistance, instead of the analogue instruments. I would do this because a digital instrument is a lot more accurate than an analogue because if the needle in the analogue voltmeter, for example, is bent then the readings given off will be false whereas a digital voltmeter does not rely on a needle or any other manual movements and the reading error can be made very easily along with the parallax error, on which we have to avoid.

As well as making these modifications I would also improve my Investigation by testing the same wire but different widths of that wire. I would do this to expand on my Investigation.