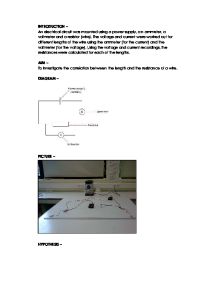 To investigate the correlation between the length and the resistance of a wire. 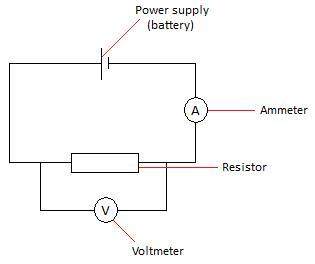 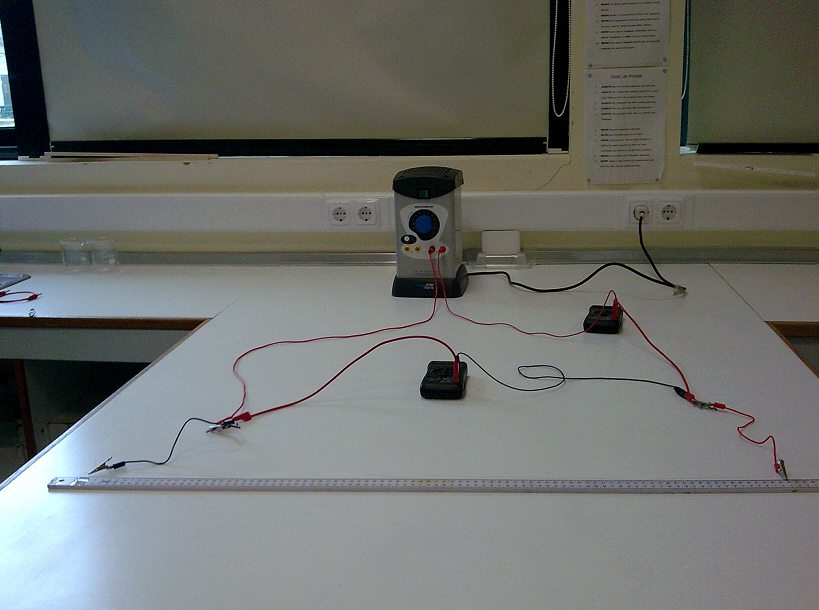 I predict that the longer the wire, the greater the resistance. This is because the electrons have to move in a longer distance, making the opposition (resistance) of conductor to the current greater.

To work out the resistances of the different sized wires, we used the Ohm’s Law. The law states that:

So, we first recorded the voltage and current for different

Although the results came as initially expected, the experiment could have been improved in some ways. Firstly, the wire could have been stretched more (in the limit), to give the more precise lengths. As the wire wasn’t fully stretched, the length readings could have been wrong, affecting the current and voltage. To prevent the wire from overheating, we should have decreased the power from the power supply, as temperature increase can also affect the results. I think that the number of trials was the ideal and repeating it one more time wouldn’t be much useful (although they would be slightly more accurate).

Apart from that, I can say that the experiment went well and was a fair test. The results lead to a conclusion very similar to the hypothesis, which shows us that everything went as expected.

The writer had approached the question well, overall having a well written report. It was nice that the writer decided to give a brief introduction. However, it then was annoying when not only that there wasn't a list of apparatus ...

The writer had approached the question well, overall having a well written report. It was nice that the writer decided to give a brief introduction. However, it then was annoying when not only that there wasn't a list of apparatus but the diagram didn't clearly show where the wire and ruler where going to be placed.It was good that the writer was able to give a hypothesis before the actual experiment, which shows that the writer knew the knowledge behind the experiment that they were doing and why certain correlations would have occurred. When they mentioned Ohm's law, they should have mentioned the conditions that are needed in order for a material to obey Ohm's law. The writer has a clear and easy graph to follow showing the relation between length of a wire and resistivity, also clearly labelling units of measurements. It was also good that the writer explained the effects of temperature on the wire. The evaluation was written well and explained all the draw backs within the experiment.

The writer's scientific language was of a high standard. Before starting any experimentation, the writer has explained their thoughts on the experiment which shows that the writer was aware of the science involved within experimentation. When it comes to writing decimal numbers, the writer should have written full stops instead of commas. The writer has got the write concepts in terms of calculations, but they have to make sure that the formulae that they use are correct fully.

The spelling and grammar are of a high standard. However, the writer should double check over their work to make sure that it all makes sense when it's being read. For example "the greater the length of wire lead to a greater resistance" doesn't make sense when read. The use of technical terms are used correctly. However, if they are recording data, they should make sure that all data is kept on the same page if they can. It makes it easier for a reader to follow.