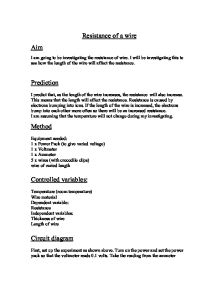 Then do exactly the same again but use voltages of 0.2 volts, 0.3 volts, 0.4 volts and 0.5 volts. This is so that when we work out the resistance (V/I) we will have three readings and can then take an average resistance. Then carry out the whole experiment again, varying the length of the wire in intervals of 150mm starting at 150mm and ending at 750mm. Once we have worked out the resistance, we can draw a graph to discover any relationship between the length and the resistance of wire. The equation for resistance = V/I Results Length of wire in MM Current in amps (controlled) ...read more.