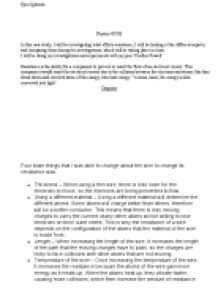 Resistance of a Wire - Triple Science

In this case study, I will be investigating what affects resistance; I will be looking at the different aspects, and comparing them during the investigations, which will be taking place in class.

I will be doing my investigations and experiments with my peer 'Coelbie Powell'.

Four Main things that I was able to change about the wire to change its resistance was:

Length gave the biggest variation in resistance and that thickness didn’t change the resistance much. Also that temperature was too difficult to control and measure. That’s why you decided to investigate length.

In the investigation it was vital to keep all the factors the same because if I did not, then it would make the results inaccurate, and give me inaccurate conclusions.

When trying to keep the material of the wire the same, it should be quite simple because all that needs to be done is to be aware of the certain wires and what packages the wires are coming from, so that I do not get mixed up.

Keeping the factors the same:

It is vital to keep all the factors the same because it will interfere with the results and I will fail to get to the true value, so the investigation will not be reliable.

The material used was constantan

My longest will be 100cm, because 150cm was too long. The shortest length will be 10cm, because 5cm seemed to be too short, and while observing peers experiments, I saw 5cm wasn’t a good length due to lack of range.

I decided to choose the thick material because there is more room for the current to flow, and the material could become a health hazard if it was a shorter length.

I decided to choose 2V because it showed a good result and didn’t become too hot like 3V or absolute no change like 1V.

I decided to arrange the circuit having the volt meter vertical across from the power pack, while the ammeter is connected on the left hand side to the power pack and by using a ruler to keep the wire straight so it is more accurate.

I also will be measuring the wire using a meter ruler and will be keeping the temperature down by keeping the power pack level at 2volts.

I counted the seconds of how long the power pack was on for to test for the investigation, my partner then read the results, and wrote it down, while I moved the clip to the next position. I double checked my results, making sure I was close to the true value, so I had no outliers.

When doing my experiment on the different lengths of the wire, I double checked everything, to ensure that everything was correct, and there was no in-corrections. I recorded my results in the table below:

To make sure that all the tests are done safely, the power pack settings will be under 5 volts, so that the constantan wire will not get too hot and burn. If I did not take this safety measure into consideration then it could damage and affect the experiment, and give un-reliable results. Also all bags and outdoor clothing will be away from the experiment, in case any heat causes any accidents.

At the start of  the investigation, I don’t believe that I started off to well, as I was behind the rest of my peers, because my partner and I was a bit confused. However, when I understood what I was doing, I soon caught up, and was off to a flying start. The length investigations went very smoothly.

I did find that sometimes, it was quite difficult to be accurate with whether the tip of the crocodile clip was exactly on the measurement I wanted, because it would make around etc. One way I could have made sure that I was doing this accurately, was to make sure I pinpointed, If I had ensured this, I would have got more accurate readings, and much more precise measurements.